A Review of Social Credit Economics 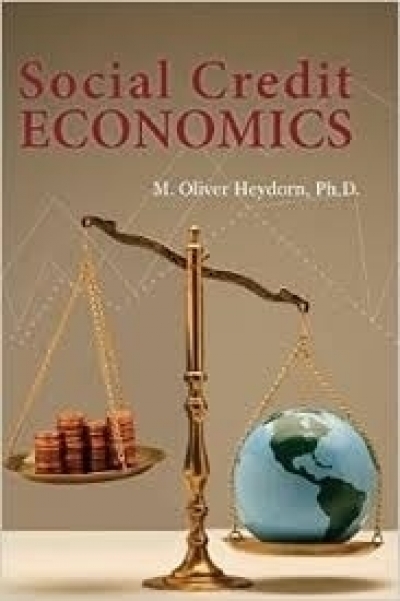 The following review of Oliver Heydorn's Social Credit Economics by Brent Ranalli will be published in the next edition of Basic Income Studies. It is already available on-line here: http://www.degruyter.com.ezp-prod1.hul.harvard.edu/printahead/j/bis.

Reviewed by Brent Ranalli, The Cadmus Group, 100 Fifth Ave, Suite 100, Waltham, MA 02451,USA, E-mail: This email address is being protected from spambots. You need JavaScript enabled to view it.

Most proponents of a Basic Income Guarantee (BIG) are aware that the Social Credit movement, which was founded by Major Clifford Hugh Douglas and flourished especially in British Commonwealth countries in the 1920s and 1930s, promoted a scheme of monetary reform that involved universal dividends. Relatively few are probably acquainted with the details of Douglas’s reform ideas. Oliver Heydorn’s book Social Credit Economics provides the useful service of gathering together the various elements of Douglas’s ideas about monetary and economic reform from his many writings and presenting them systematically. Social Credit Economics is a large book (over 500 pages). Its bulk is due in part to extensive quotations from Douglas’s own words in the text and in footnotes, which Heydorn includes to demonstrate that the interpretation he presents is authoritative (against alternative interpretations of Social Credit that have been put forward over the years by both opponents and ill-informed allies). But the interest of the book is far from merely antiquarian: Heydorn forcefully argues that the problems Douglas identified and the solutions he offers are just as relevant today as they were a century ago, if not more so. Douglas’s central insight was that the total price value of goods and services a firm produces in a given period (say, a year) is normally higher than the total income (wages, salaries, dividends, etc.) the firm places in the hands of consumers during that same period. There are structural reasons for this, and the disparity between prices and consumer income increases as industries increasingly substitute capital for labor. In aggregate, a society organized like ours will face a permanent problem of deficient consumer purchasing power, which will chronically threaten the solvency of firms, and consequently that of households and nations as well. We cope with the problem in various ways, but none really provides a solution: aggressive trade policies merely shift the deficiency from one country to another; borrowing (by consumers, producers, and governments) merely postpones the day of reckoning and increases its magnitude. When coping fails, we have periodic financial and economic crises that right the imbalance by destroying productive capacity via bankruptcies and foreclosures.

In Douglas’s analysis, the root of the problem is found in the financial sector, which supplies money (credit) to all other economic actors, including government. Heydorn repeats the common rule of thumb that approximately 95% of money in circulation is bank credit as opposed to treasury-issued bills and coins. Since financial institutions charge interest, a loan always adds more debt than credit to national accounts, aggravating the deficiency in purchasing power. Furthermore, financial institutions control the policy of money creation (deciding who to lend to and on what terms) in ways that serve their own private interests rather than the public interest. Finally, and most fundamentally, the financial institutions claim private ownership of the credit they issue, credit that Douglas argues properly belongs to the community as a whole. Banks lend on behalf of themselves, not on behalf of the community. In Douglas’s vision, a reformed financial sector would serve the rest of the economy in the manner of a utility: like providers of water and electricity, providers of credit would be regulated in the interest of the consumers and the general business community they serve. Banks would still be private and (modestly) profit-making institutions, but the credit they issue, as brokers, would originate in a National Credit Office (NCO). With the grip of the financial sector on the rest of the economy broken, a nation’s NCO could make policy to remedy the deficiency of consumer credit vis-à-vis prices. Douglas proposed two complementary measures: a national discount and a national dividend. The dividend would put money directly into the pockets of all consumers, an equal amount to each individual, similar to a partial or full BIG. The discount (which I will not attempt to explain here in full) would further extend consumers’ purchasing power, and also neutralize any inflationary pressure that might attend the payout of a national dividend. Heydorn devotes several pages to spelling out the similarities and differences between Social Credit reforms and BIG. Like BIG, Social Credit envisions a society where individuals are increasingly free to accept or forgo paid employment, free to step off the treadmill of wasteful production and conspicuous consumption and devote their time to those activities they find most fulfilling, whether within or outside the formal economy. Unlike BIG, the size of a Social Credit dividend is established based on what national accounts indicate the economy can support, irrespective of standard-of-living indices. Depending on economic conditions, the Social Credit dividend in a given nation may exceed a full BIG or fall short. Another difference is that unlike many BIG proposals, the Social Credit scheme is explicitly not redistributive. Social Credit economics is the “policy of a philosophy” (in Douglas’s words), and Douglas’s philosophy is one of robust individual rights, opposed on principle to coercive taxation, including redistributive taxation.

Social Credit offers a complete package of economic (and indeed social/political) reform, and thus can be seen as an alternative to BIG. But can it also be seen as capable of contributing something to the BIG movement? At first glance, there appears to be no practical reason why a nation that engages in redistributive taxation could not also reform its financial sector along the lines proposed by Douglas. Heydorn notes that Douglas opposed land taxation in the style of Henry George, but it would appear that this opposition stemmed from Douglas’s political philosophy and is not essential to his financial-sector reform program. There appears to be nothing in Social Credit practice or philosophy that would be incompatible with the idea of redistributing wealth from the commons (natural resources, etc.) in the manner proposed long ago by Thomas Paine and promoted in recent years by entrepreneur Peter Barnes, author of Who Owns the Sky and Capitalism 3.0. In his most recent book, With Liberty and Dividends for All, Barnes explicitly advocated treating the financial system as another sort of commons capable of generating dividends, but did not specify in detail how it would work. Douglas supplies a concrete program. It is a widely shared view today, not only among BIG advocates, that our financial system is dysfunctional and in need of reform. Heydorn’s book performs the valuable service of offering one coherent blueprint of what a reformed financial system in the twenty-first century could look like. But the book does more than that, it poses a challenge: If Douglas’s analysis of the structural problem in our economy is valid (namely, that where private financial institutions hold a monopoly on credit there will be a permanent deficiency in consumer purchasing power), even a robust BIG program will not prevent periodic economic crises from recurring, crises that could threaten the continued financial viability of BIG itself. Simply put, those who take BIG seriously ought to take Douglas’s analysis seriously, and either rebut it or embrace it. And if they embrace it, they will need to either adopt Douglas’s reform program for the financial sector or develop alternative reforms that adequately address the problem Douglas has identified. I will not presume to judge the outcome. I will say that Heydorn makes the case for Social Credit in a way that is very compelling on its face. The book is well organized, and Heydorn writes with the precision of a philosopher (he is in fact an academic philosopher by training). One wishes, perhaps, that the book might have included additional graphic elements: for instance, diagrams to illustrate the flows of credit among banks, firms, and households described in the discussion of Douglas’s famous “A+B” theorem. Taken on balance, Social Credit Economics is challenging, rewarding, and valuable. Heydorn’s painstaking scholarship makes it possible for contemporary scholars to critically engage with Douglas’s economic ideas. The outcome of that engagement holds great interest for the future of BIG.