Written by The C.H. Douglas Institute
Rate this item
(1 Vote) 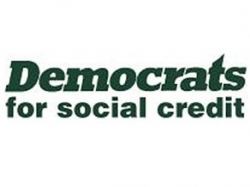 The New Zealand "Democrats for Social Credit" Party is celebrating its 60th anniversary this coming weekend:

It should be noted that Major C.H. Douglas was, for both tactical and more principled reasons, strongly opposed to the establishment of Social Credit political parties:

There is at the present time an idea that we should have a Social Credit party in this country. I can quite understand and sympathise with that idea, but it is a profound misconception. It assumes that the government of the country should be a government of experts. Let me show you that it does assume that. If you elect a Social Credit party, supposing you could, I may say that I regard the election of a Social Credit party in this country as one of the greatest catastrophes that could happen. By such an election you proceed to elect, by the nature of it, a number of people who are supposed to know enough about finance to say what should be done about it. Now it is an axiom of experience that no layman can possibly direct the expert in details, and in normal things no layman is fool enough to try to do it.

If you had a Social Credit government, it would proceed to direct a set of very competent experts – the existing financial authorities, for example – how to do their jobs. The essential thing about the situation would be the responsibility for what was done. Now no set of 500 or 600 men whom you could elect in this country could possibly know as much about finance as the people they would presume to direct. You know, in all that I have said about financiers, I have never at any time said that they were incompetent, nor are they, within the limits of their own philosophy. But to elect a Social Credit party in this country would be to elect a set of amateurs to direct a set of very competent professionals. The professionals, I may tell you, would see that the amateurs got the blame for everything that was done.[1]

In the place of political parties, Douglas advocated non-party political action on various levels as a means of educating the general population and of putting sufficient pressure on the centres of power so that Social Credit measures could be introduced.

Tweet
More in this category: « A Review of Social Credit Economics Re: "The Costliest Money Mistakes" »