What is the 'Monopoly of Credit'? 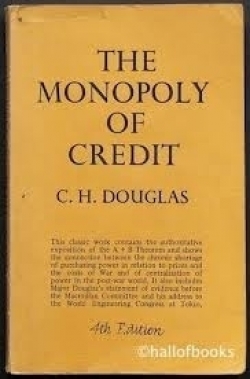 In perusing Social Credit literature, a phrase that one encounters quite frequently is the “Monopoly of Credit”. Indeed, The Monopoly of Credit was the title of C.H. Douglas’ last major technical work dedicated to the exposition of Social Credit economics. Since the phrase is often employed without being precisely defined, and since some Social Crediters use it without being conscious of its exact meaning, it would be a useful exercise to pause and focus our attention on this particular phenomenon, a phenomenon which, more than any other, may be taken as the central characteristic of the standard financial system that presently reigns the whole world over.

As many people are now only learning for the first time, money, the life-blood of the economy, exists in one of two forms: currency or credit.[1] Currency refers to the physical tokens of money, i.e., the bills and coins which are typically printed and minted by a government authority. Credit, on the other hand, takes the form of intangible numbers that used to be recorded in bookkeeping documents and are now stored in computer databases. In our contemporary world, the creation and issuance of credit is the prerogative of private banks.

Yes, that’s right. Let it be restated for the umpteenth time if need be: banks do not lend their customers’ deposits; they are not intermediaries between savers and borrowers. Instead, they are creators of the deposits which they lend, invest, or otherwise spend into existence. How is this accomplished? Quite simply by an act of the will involving accounting ledgerdemain, the confirmation afforded by legal sanctions, and the regulations demanded by good business practice.[2] In accordance with the principles of double-entry bookkeeping, the creation of credit generates both assets and liabilities on a bank’s books. Credit that is held on deposit in a bank, regardless of its origin via a loan, investment, or bank operating expense, is accounted as a liability, while the loan, securities, or bank property, etc., are regarded as assets.

The “Monopoly of Credit” is therefore the monopoly which private banks, or the private banking system considered as a whole, exercises over the creation and issuance of credit. And, since the vast majority of the money supply at any given point in time exists in the form of bank credit (that figure tallies at over 95% in developed nations), the banks’ ‘credit-monopoly’, is a near total ‘money-monopoly’.

See also: Yes, Virginia, the Banks Really Do Create Money Out of Nothing

[1] The accepted Social Credit definition of money originated in the writings of a certain Professor Walker who, in his book Money, Trade and Industry, had said that money is ‘any medium no matter of what it is made or why people want it, no one will refuse in exchange for his goods.’

[2] Only banks can legally create credit. Anyone else who attempted to do so would be charged with counterfeiting.

Tweet
Published in Social Credit Views
More in this category: « Organic Society The Distribution of Credit »