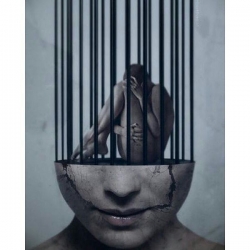 'Are people hopelessly stupid—or do they take some perverse and sick pleasure in being slaves?'

Though it's a rhetorical question, I think it's worth bearing in mind just how difficult it is to break out of a mental prison.  Such a prison is created by the dogmas of mainstream economics which misleads both academics and the general public.  Were it just one or two dogmas, the jailbreak would be easy - but unfortunately we are dealing with at least half-a-dozen.  What's worse, many of them are implicit: they are not openly stated or discussed.  As if this was not bad enough, the main alternative school of economics, (Marxism) simply replaces some dogmas with other ones and retains the rest.

And as the German philosopher Stirner noted:

''If an age is imbued with an error, some always derive advantage from the error, while the rest have to suffer from it.'

That sums up our plight.  I'll list of some of the errors:

The Reality - Prices have a lower limit set by cost.

The Reality - Wages are inflexible downwards, primarily because employers don't want to undermine the morale of employees by cutting their pay.

The Reality - Outside the World Wars, modern economies (i.e. mechanized, industrial ones) do not operate at full capacity, because the financial credit loaned by the banks is only a fraction of real credit - since it is not in their interests to loan more.   (And by fraction, I mean something close to 1/4 or even less). [Beyond this observation, full employment of labour is neither necessary nor possible for a technologically developed country; i.e., we can provide for all of our needs without employing the whole of the population so there is not enough meaningful work to go around. - Ed]

The Reality - Governments have coinage sovereignty and therefore can always create money in whatever quantities required.

Dogma #5 - The velocity of circulation of money.

The Reality - A given sum of money can never liquidate more than an equal quantity of costs, because it no longer exists as consumer purchasing power thereafter.  [The velocity of the circulation of money theory only applies to second-hand sales or, potentially and partially, to the spending of profits - Ed]

Dogma #6 - Supply creates its own demand.

“Categorically, there are at least the following five causes of a deficiency of purchasing power as compared with collective prices of goods for sale: 1) Money profits collected from the public (interest is profit on an intangible); 2) Savings; i.e., mere abstention from buying; 3) Investment of savings in new works, which create a new cost without fresh purchasing power; 4) Difference of circuit velocity between cost liquidation and price creation which results in charges being carried over into prices from a previous cost accountancy cycle. Practically all plant charges are of this nature, and all payments for material brought in from a previous wage cycle are of the same nature; 5) Deflation; i.e., sale of securities by banks and recall of loans.”

(Major Douglas, The New and the Old Economics)