The Flaw in The Circular Flow 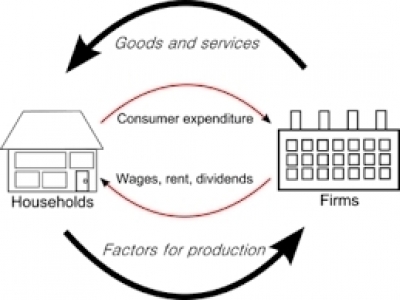 In the modern world money is simply accountancy. It's issued by banks for production. Producers distribute it as effective purchasing-power as wages, salaries and dividends which are a part of industrial costs and prices. Industry must recover its costs through sales to the consumer and the money is then cancelled until reissued for a new cycle of production. Thus is created an endless cycle of money creation and destruction. Money is not a store of value and is increasingly a means of distribution rather than a means of exchange.

However, industry has many other costs including allocated charges in respect of real capital (plant, tools, etc.) which are not distributed as income in the same costing cycle. This creates a widening chasm between costs or final prices and effective consumer incomes–creating a deficiency of consumer income which becomes ever greater due to the increase of un-monetized capital charges in total prices. This “gap” becomes greater as the modernizing economy becomes more real capital intensive through greater use of non-labour factors of production.

This widening deficiency of effective purchasing power is met today by exponentially expanding bank debt issued to consumers, industry and governments. The gap between final prices and effective consumer incomes should not be made up by additional debt as a growing charge or mortgage against future production. Nor should it be filled by new money derived from an excess of real exports over imports–nor from superfluous, wasteful and destructive capital and war production.

The required expansion of purchasing-power should be created without debt and distributed from a properly constructed National Credit Account to all citizens as National (Consumer) Dividends and to retailers enabling them to sell, at point of sale, at increasingly lower prices, i.e., Compensated Retail Prices, in order to reflect the real physical efficiencies achieved by industry. The banks create this necessary credit all the time as a debt owing to themselves although they do not create the real wealth of the community which they are monetizing. Yet they will foreclose on these assets if a borrower defaults on a loan. The technical term for this process is counterfeiting and it must be stopped once and for all. Modern banking is simply a colossal counterfeiting racket–so colossal that the average citizen simply cannot believe it.

The creation of money by banks is old news. It was explained by H. D. McLeod in “The Theory and Practice of Banking”, 1883. Reginald McKenna, one-time Chancellor of the British Exchequer wrote in his “Post-War Banking Policy” (1928), “I am afraid that the ordinary citizen will not like to be told that the banks, or the Bank of England can create or destroy money.” In 1924 he had addressed a Midland Bank shareholders meeting: “The amount of money in existence varies only with the action of the banks on increasing or diminishing deposits … every bank loan and every purchase of securities creates a deposit, and every repayment of a bank loan and every sale [of securities] destroys one."

The creation of money by banks is “old hat”. What has not been properly revealed is the crime of the banks in falsely claiming ownership of the credit they create in monetizing the community’s real wealth. They have literally appropriated the community’s credit by an act of legerdemain undetected by an unsuspecting public. The whole subject was dealt with by C.H Douglas and the Social Credit movement during the 1920s on into the post-war period.