Socialism, Social Credit, and the Monopoly of Credit - Part 5 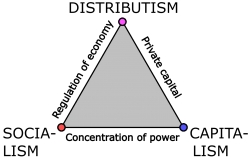 V.) Socialism and the Monopoly of Credit

'Again, the final word in the development of the banks, is monopoly.'

- V. I. Lenin, Imperialism: The Highest Stage of Capitalism, page 38.

'When the Mutual Aid institutions - the tribe, the village community, the guilds, the medieval city - began, in the course of history, to lose their primitive character, to be invaded by parasitic growths and thus to become hindrances to progress, the revolt of individuals against these institutions took always two different aspects.  Part of those who rose up strove to purify the old institutions, or to work out a higher form of commonwealth, based upon the same Mutual Aid principles....  But at the very same time, another portion of the same individual rebels endeavoured to break down the protective institutions of mutual support, with no other intention but to increase their own wealth and their own powers.  In this three-cornered contest between the two classes of revolted individuals and the supporters of what existed, lies the real tragedy of history.'

One of the most important points of contention between Eastern and Western socialism concerned the theory of 'ultra-imperialism' promulgated by the German socialist, Karl Kautsky.  Observing the growth of colonial empires and the increasing monopolization of the economy, as well as escalating defence budgets that were burdening all the Great Powers, Kautsky predicted a future where the competing empires would coalesce into a single entity - a global capitalist behemoth as it were.

Unfortunately for Kautsky, he wrote just prior to the First World War, which witnessed the Great Powers combating each other rather than combining.  Writing in the midst of this conflict, Vladimir Lenin strongly criticised Kautsky's theory, arguing that the Great War demonstrated the inevitability of conflict between rising and established capitalist powers rather than any peaceful unification of imperialisms.  With a century's hindsight, we can appreciate that Lenin was correct: the establishment of ultra-imperialism through the combination of the capitalist powers required something else: a common enemy.

It is one of the most extraordinary ironies of history that Lenin the revolutionary would create the common enemy that catalyzed the development of the very ultra-imperialism that Lenin the theoretician had denounced.  The creation of the Soviet Union, an anti-capitalist state, and its emergence as a superpower following the Second World War, provided the foe whose very existence was sufficient to mitigate the rivalries between the various non-communist states and bring them to subordinate themselves to a set of global institutions (the United Nations, the International Monetary Fund, the World Bank, GATT/WTO, and above all, the Bank for International Settlements), backed, in the final analysis, by American military and money power as embodied by NATO and the dollar.  The four decades of the Cold War were, in hindsight, the gestation period for what Marxists would call 'ultra-imperialism', right-wing theorists 'the New World Order', and Social Crediters, the global Monopoly of Credit, (MoC).

Such was the (probably inadvertent) contribution of Eastern socialism to the hegemony of the MoC.  To understand the contribution of the Western version, it is best to commence with an observation of Italian sociologist, Robert Michels:

Indeed, the phenomenon of a revolutionary movement in one age becoming conservative or even reactionary in the next, has already been demonstrated by Liberalism, which in the 18th century was a crusading force opposing feudal institutions in a handicraft age, whilst in the subsequent centuries, it sought to preserve and protect its beloved 'capitalism' from the Socialist challenge.  Similarly, Socialism, an ideology of the Machine Age, was not a serious threat to the MoC in the Power Age.  In fact, unwittingly, and in some cases, consciously, Socialism served the MoC, by:

i) Denouncing and undermining two sources of economic independence: property and profits.

ii) Maintaining the principle of payment only for work, thereby promoting a policy of full employment and its inescapable concomitant (given our contemporary economic system): ever-increasing borrowing (either by a country or its trading partners, or indeed, both).

iii) Diverting attention from Finance to Administration, or to put it simply, from money creation to class conflict.

iv) Frightening centrists, conservatives and others into supporting the status quo - i.e. the MoC.

Perhaps the most serious effect of Socialism - specifically, Marxism - was providing ideological cover for the ongoing strengthening of the State, (a development I have explained in my paper Financial Credit as a Merit Good: https://www.socred.org/s-c-action/social-credit-views/financial-credit-as-a-merit-good - an institution which is increasingly an instrument of the MoC, as well as a target that deflects attention away from it.  Thus, Socialism has facilitated the concentration of power on both the national and international levels.

Looking back, we can observe that the triumph of the MoC, thanks in no small part to the role played by the Socialists (often unwittingly), has enabled it to turn the three revolutions to its advantage - at the expense of the common man.  The Mechanical Revolution, the Electrical Revolution and the French Revolution were meant to liberate man from toil and tyranny: instead, they have led to his further subjugation through wage-slavery, debt-slavery and rising taxation.  It is more than a little tragic that the sincere studies, serious struggles and severe sacrifices of countless radicals, revolutionaries and other activists who strove for a better world in the name of Socialism should have led to this outcome - the tightening of the invisible chains that bind mankind.