The (Big!) Difference Between a 'Basic Income' and the National Dividend 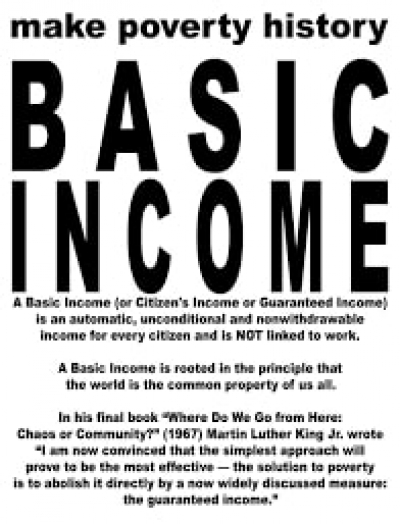 It seems that more and more people in various countries are starting to take proposals for the introduction of a basic income quite seriously.

According to the bien network: "A basic income is an income paid by a political community to all its members on an individual basis, without means test or work requirement." Cf. http://www.basicincome.org/bien/aboutbasicincome.html#faq

The Social Credit proposal of a National Dividend can also be defined as '... an income paid by a political community to all its members on an individual basis, without means test or work requirement.'

However, the National Dividend must not be confused with a basic income because there are hugely significant differences between them.

In what follows, I will only focus on what I take to be the three key differences:

1) The Structural Nature of the Proposed Benefit

Whereas the basic income is typically conceived as a fixed amount that would be granted unconditionally and would be enough for a person to survive on, the National Dividend would vary depending on the performance of the economy. In other words, the dividend is indexed to productivity. No productivity, no dividend. The greater society's productivity, the greater the dividend. It is expected that, in a highly industrialized country, the dividend (in conjunction with compensated prices and massively reduced taxation) should be at least sufficient to meet each person's basic expenses and that its relative purchasing power vis-à-vis salaries and wages should also be growing as machines replace human labour in the productive process.

2) The Social Purpose of the Proposed Benefit

Whereas the basic income is normally allied to a policy of full employment (i.e., the amount given to citizens must not be so great as to serve as a disincentive to seeking work in the formal economy), the National Dividend is allied to a policy of increasing leisure. Social Credit is opposed to full employment as a fixed objective. People should only be required to labour in the formal economy insofar as their work is actually needed in the provision of those specific goods and services that they would independently select (i.e., if their choices were not conditioned by the artificial scarcity of money that is an inherent characteristic of the present financial system). Machines of various types make it possible for a technologically advanced society to produce enough to meet everyone's needs without calling on the full capacity of the labour force. Any policy that goes beyond this and requires people to devote more time to production than the physical facts of the economy warrant is a policy of servility (it is a form of enslavement) and is also grossly inefficient and hence socially and environmentally wasteful.

3) The Financing of the Proposed Benefit

Whereas the basic income is usually conceived as being funded within the financial constraints of existing economic orthodoxy, i.e., through redistributive taxation, or an increase in public indebtedness, or the redistribution of profits from publicly owned corporations, etc., the National Dividend is financed through the debt-free creation of new credit that would be issued by a National Credit Office. The creation of this additional money by an organ of the state is justified by the fact that there is a chronic and underlying gap between the prices of goods on sale to the consuming public and the money that was made available in the course of their production. Principally because of the way in which real capital (machines and equipment) are financed and the way in which their costs are then accounted for, the existing financial system generates consumer prices at a faster rate than it distributes consumer incomes. Social Credit proposes to fill this gap via the creation of a sufficient volume of debt-free money so that the "surplus production", i.e., the production for which no consumer income is automatically being distributed, can be bought without relying, as we currently do, on the contracting of new debts (whether on the part of governments, businesses, or consumers) for additional consumer purchasing power (amongst other palliatives). It is simply a matter of monetizing, if you will, the additional production. If a certain volume of goods and services alongside their prices exist, but the money to purchase them does not (because of an as-yet-largely-unrecognized accountancy error in the existing financial system), the credit needed to bring the monetary representation of reality into full alignment with reality should be summarily created and issued directly to consumers. The National Dividend would thereby contribute to the establishment of a real equilibrium in the economy's circular flow, i.e., an equilibrium that would be the fruit of a self-liquidating financial system, where consumer prices and consumer incomes would be held in an automatic balance. The basic income, by contrast, does nothing to achieve a self-liquidating financial system and may even, depending on how it is financed, contribute to the build-up of unrepayable debt.

Because of the stark contrast between the two proposals, Social Crediters should be very careful not to jump on the basic income bandwagon. Instead, we must convince basic income supporters that the National Dividend will deliver what they most desire (a certain measure of universal economic security), while simultaneously contributing, on the basis of our enormous physical economic potential, to a broader and most necessary reformatting of economic life in line with the true purpose of economic association: the delivery of those goods and services that people can use with profit to themselves ... with the least amount of trouble to everyone.

Furthermore, let us not be naïve. There are powerful vested interests who may choose to have the basic income introduced for their own reasons. Should the basic income fail (because it turns out to be too financially burdensome, or too many people stop working, etc.), it could be used to discredit real Social Credit: "They tried that and it did not work". Even if it can be sustained long-term under existing financial methods, the basic income will likely tend to mitigate the dissatisfaction of the populace with the existing system, thus further entrenching that system and perhaps making it impossible to dislodge (while at the same time possibly increasing the hold that the financial powers exercise over society via increases in taxation and/or public debts). From this perspective, the basic income may be seen as a few crumbs that the credit monopolists toss to the people in order to keep both them and radical, substantial change at bay. The proposal of a basic income would then qualify, like Keynesian economics before it, as an attempt to co-opt Social Credit by re-engineering one of Douglas' key remedial mechanisms in the service of the existing 'Monopoly of Credit'.