What Social Credit Can Do for Distributists 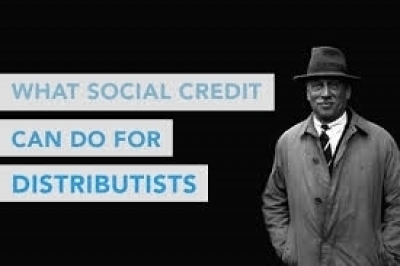 As I explained in my first article for The Distributist Review: Social Credit: An Introduction for Distributists, the economic proposals of Social Credit aim at the establishment of a widespread distribution of private productive property ownership through the means of monetary reform. The ownership in question is a beneficial rather than direct ownership and it involves the distribution of the societal profit (i.e., the surplus production resulting from the recurring price-income gap) in the form of national dividends and compensated or discounted prices to the economy’s true shareholders: the common citizenry.

While Social Credit does not mandate nor favour, as an explicit matter of policy, the distribution of direct ownership of productive property to workers along the lines of ‘classical’ Distributism, it has no objection, per se, to distributist models of productive organization, such as family farms, small businesses, workshops, trades, and co-operatives, etc. On the contrary, insofar as these types of businesses, which combine work and capital ownership in their very structures, are more effective and/or efficient in delivering the sorts of goods and services that consumers really desire from their economic associations and, in the second place, are more reflective of how the dwindling numbers of meaningfully employed people actually wish to work, the introduction of a Social Credit financial system would provide a very favourable financial environment for the proliferation of distributist firms.

In what follows I will attempt to explain, with the aid of a concrete example, how Social Credit promises to greatly improve the socio-economic conditions surrounding the operations of employee-owned enterprises, thus rendering them easier to establish and maintain.

My brother-in-law is a personal trainer who owns his own small company. He and his handful of employees provide highly personalized service to local athletes and fitness enthusiasts … the distributist ideal in action! However, in order to make the business run under existing financial conditions, he has to work from 6 AM every morning (except Sunday) until 9 PM at night. In spite of this extreme dedication, there are slow periods in which he cannot afford to pay himself (the employees must come first) and his family must rely on his having saved up past profits. Even when business is good, there is no work-life balance and my two little nieces do not really see him all that much during the week unless he can come home for lunch. My brother-in-law is not an extreme case, in many different sectors ‘life as a workaholic’ would seem to be a necessary condition for having a successful small or family-size business.

Just in case there may be any doubt about the matter, ‘workaholism’ is bad. We do not live in order to work, rather we work (or should work) in order to live and hence only to the extent that such work is a natural (rather than artificial) necessity. As C.H. Douglas once put the matter:

The root problem of civilisation—not the only problem, but that which has to be disposed of before any other—is the problem of the provision of bed, board and clothes, and this affects the ordinary man in terms of effort. If he has to work hard and long hours to obtain a precarious existence, then for him civilisation fails. [1]

If, under current financial conventions, industrial production (and I use the word ‘industrial’ in the broadest possible sense—any production involving the use of real capital in the form of machinery, tools, etc., may be regarded as industrial) necessarily generates a flow of price-values which, even excluding any question of profit, significantly exceeds the purchasing power which it simultaneously distributes to consumers, then there is a fundamental problem concerning the basic financial terms to which all productive organizations, whether capitalist, distributist, or socialist in orientation, are subject, to say nothing of the interests of consumers. The price system is inherently unbalanced and, as a direct result, our economic activities are artificially handicapped as well as distorted by the insufficiency of consumer income. The distributists may want to see many more people go into business for themselves or in close collaboration with others, but, given the insecurity and difficulty of this method of earning a livelihood under the existing financial system, it should come as no surprise that a lot of people prefer to work as contractual employees.

But now, let us reconsider my brother-in-law’s situation under Social Credit. In the first place, each member of his family would be the recipient of a monthly dividend (let’s say two adult dividends and two mini-dividends for the children). The purchasing power of that dividend would, in addition to any other income they received, be increased by the compensated price discount that would apply uniformly to all retail goods and services. This would decrease the general financial pressure that is placed on my brother-in-laws shoulders, thus allowing him to be more selective in terms of whether, when, and how he works. On the other end of the equation, Social Credit, by increasing everyone’s purchasing power and providing the opportunity for increased leisure, is likely to expand his pool of potential customers and also the hours that they would be available for training. The end result is that my brother-in-law should be in a far stronger and better position to determine which customers he will be available to train during which times of the day. Under a sane financial system, he could run his business on his own terms, rather than on the unjust terms of financial viability that are presently imposed by the credit monopolists.

Another advantage for the small enterprise under Social Credit is that it would level the playing field so that the ‘free’ market could function as a much fairer market. Cheaper products have a natural advantage over their more expensive competitors in any economy. Buying them enables people, ceteris paribus, to obtain the most satisfying bundle of goods, to get the most for the least. But, in an economy in which proper consumer purchasing power is chronically insufficient, cheaper goods have a double advantage. [2] Very often they are preferred, not because they are reflective of what consumers would really want, but because they are reflective of what consumers can afford. Since larger organizations, and especially transnational and multinational firms, are in better position to take advantage of things like bulk-buying, better financial terms, differences in national and regional markets, and lower regulatory costs per unit of production, etc., they are the ones who can deliver the cheaper products. The present financial system thus favours, in the operation of its very structure, the centralization of the ownership and control of production in fewer and fewer hands. In a Social Credit commonwealth, in which prices and incomes are maintained in an automatic, self-liquidating balance, this double advantage disappears. Consumers will always have the wherewithal to purchase the more expensive product that is locally produced on a smaller scale, and, if they find that product to be of better quality or the customer service to be more competent and personable, etc., they will opt for the production of the distributist firm over that of the traditional corporation.

The bottom line is that enfranchising each citizen, whether employed or not, as a shareholder in the common venture (aka ‘society’), and duly distributing that venture’s profits by a rational reform of the economy’s operating system, i.e., its financial system, are bound to deliver a number of knock-on benefits that should be of great interest to classical distributists. The fact that a ‘macrro-distributism’ or a ‘monetary distributism’ along Social Credit lines would make it much more feasible for those who wished to pursue ‘micro-distributist’ projects to do so is just one of those many advantages. [3]

[3] I am indebted to Cliff Alexander for having coined the term “monetary distributism” in relation to Social Credit.