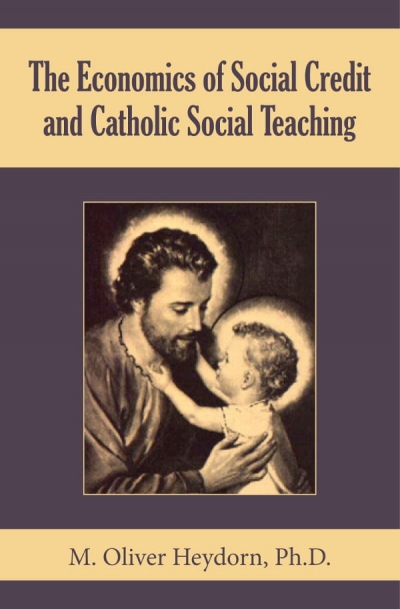 The following review of my booklet The Economics of Social Credit and Catholic Social Teaching was recently published by James Reed in Australia:

Mr. Reed has provided a very good summary of some of the major points that are presented in the booklet. I should also point out that while Douglas and many other major Social Crediters (I don't know about 'most') have been Protestants, their Protestantism has often been of the Anglican or Anglo-Catholic persuasion. This particular wing of Protestantism is a lot more 'catholic' in its social and indeed general spiritual orientation than it is protestant.  I've taken the liberty of reproducing Reed's excellent review below:

I may be proved wrong: there could well be hope for Catholicism! As reported in On Target, 27 June 2014, Pope Francis has attacked the global economic system, proclaiming that it puts money ahead of the well being of people, profits from war in a Mother Courage fashion, and readily throws the young on the scrap-heap of the economy. Some countries have a youth unemployment rate of over 50 percent, which is a shocking abandonment of the future.

I am also extremely impressed by Dr. M. Oliver Heydorn, who along with his Social Credit Economics, a massive treatise, has a little book The Economics of Social Credit and Catholic Social Teaching (2014). Although Major Douglas (1879-1952) was a Protestant, as have most other social credit founders been (e.g., Eric D. Butler), there have been, especially in Canada, a grand tradition of Catholic social crediters, in particular associated around the journal Michael. It is quite appropriate to associate a “warrior” angel, with a movement which hopes to change the world.

In his preface to The Economics of Social Credit and Catholic Teaching Dr. Heydorn points out that our present economic system is intrinsically dysfunctional, and consequently “economically, politically, culturally, and environmentally unsustainable”. Thus “we are on the path to global disaster (and have been for a number of centuries)”.

Social Credit, harnessed by the world’s Catholics could be just the thing which turns the steamroller of disaster around in ‘the nick of time’.

Although one can be a proponent of Social Credit without being a Catholic and vice versa, the reforms and policy of Social Credit mesh precisely with the philosophical principles of Catholicism. Douglas himself recognised that the Roman Catholic position on economics was an “essentially Christian outlook”. Writing in The Development of World Dominion Douglas observed: “Social Credit is Christian, not primarily because it was designed to be Christian, but because it was painstakingly ‘dis’-(un)-covered reality. If Christianity is not real, it is nothing; it is not ‘true’, it is Truth.

Catholicism and Social Credit are both opposed to the doctrines of materialism (dialectical materialism) and class struggle, the suppression of private property and enslavement and subordination of the individual that socialists/communists embrace. A theological commission established by the bishops of Quebec in the late 1930s, concluded that Social Credit was not a form of socialism or communism. The Catholic Church in and of itself does not have the economic authority to pass judgement on economic doctrine itself (and hence on the economic soundness of Social Credit), but only on broad philosophical orientations. However, the theological commission determined that Social Credit was consistent with core Catholic principles such as the dignity of the human person, the maintenance of the common good, subsidiarity and solidarity.

The primacy of the individual theme runs through the works of C.H. Douglas and other Social Credit giants such as Eric Butler. The idea is that economic and political systems should be the servants of the people and not the other way round as it is today in our economic system.

Likewise for the principle for the common good, or the Law of Love, as Matthew 22.39 expresses: “Thou shalt love thy neighbour as thyself”. Sound social association promotes the good of all persons and the whole man. Douglas believed that the aim of Social Credit was to create “a society based on the unfettered freedom of the individual to co-operate in a state of affairs in which community of interest and individual interest are merely different aspects of the same thing”, as Douglas put the matter in his “Economic Democracy”.

The principle of subsidiarity is based on the virtues of decentralisation, of not doing something with a bigger social unit that can be done with a smaller one. Catholicism thus must oppose the modern world of economic globalisation and political centralisation and Social Credit certainly does oppose this. Douglas in “Economic Democracy” summed it up concisely in saying: “We must build up from the Individual, not down from the State”.

Social Credit also serves to preserve that most fundamental unit of society, the family, hence supporting the broad decentralisation principle. Women who stay at home would have their house work economically and socially recognised.

The solidarity principle balances the principle of subsidiarity, rendering it consistent with the common good principle so that decentralisation would not allow individuals and groups to benefit at the expense of weaker individuals and groups. Both principles are needed to operate together to achieve the common good. Douglas recognised that people in society are interdependent and on that basis he rejected the individualism of liberalism which ultimately led to more powerful individuals dominating less powerful individuals. Further, Social Credit in allocating a National Dividend, which gives each individual a share in communal profits, affirms the dignity of the individual.

Eliminating the monopoly of credit and equalising the flow of final prices with sufficient consumer purchasing power means that, as Dr. Heydorn puts it, “No longer would an elite group of financiers be in a position to usurp the unearned increment of economic association in their own interests and at the illegitimate expense of the rest of us”. (p.17)

The Economics of Social Credit and Catholic Social Teaching is an excellent, easy to read book, backed up by numerous quotations and sources. All of those seeking an end to financial tyranny would do well to read this book