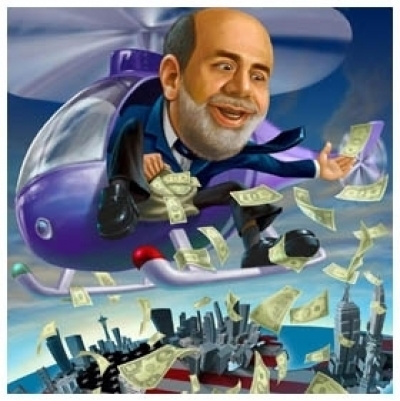 A friend recently brought my attention to a very interesting article posted by "Tyler Durden" on Zerohedge.com:
http://www.zerohedge.com/news/2014-08-26/it-begins-council-foreign-relations-proposes-central-banks-should-hand-consumers-cas.

After criticizing the Fed's attempts to boost the economy in the last couple of years through 'quantitative easing', the author proceeds to warn us about the next attempt to prop up the existing financial and economic orders: "helicopter money". He cites a recent article that appeared in the Foreign Affairs publication of the Council of Foreign Relations, entitled "Print Less but Transfer More: Why Central Banks Should Give Money Directly to the People."

That article may be read in full here: http://www.foreignaffairs.com/articles/141847/mark-blyth-and-eric-lonergan/print-less-but-transfer-more.

Now, as a globalist outfit, it should be clear that the Council on Foreign Relations and its policy recommendations are not to be trusted. The individuals who fund that particular organization are interested in centralizing economic and political power in the hands of the few, the super-rich, and not in decentralizing power in an equitable manner to each individual in society. It should come as no surprise, therefore, that what Mark Blythe and Eric Lonergan are proposing in Foreign Affairs is, in line with the Keynesian tradition, an inversion of Social Credit monetary policy. Yes, the economy needs additional liquidity (there is a recurring gap between consumer prices and consumer purchasing power), and yes it would be best from both an economic and social standpoint to deliver that liquidity directly into the pockets of consumers. However, if that additional purchasing power is injected into the economy alongside an equal volume of debt, if it comes, in other words, in the form of 'debt-money', such an adjustment merely sets up a positive feedback loop that will tend to constantly undermine whatever beneficial effects this type of innovation might otherwise have. It will increase, so long as it is persisted with, the mountain of chronic debt (which is, in the aggregate, unrepayable) under which we labour. It will likewise intensify the steady march of inflation.

You cannot deal with the problems created by an unbalanced price system and the unrepayable debts which it generates by doing more of the same and introducing even more debt-money into the system. What the economy needs and what consumers need is an increase in real liquidity, i.e., additional purchasing power which is created debt-free. The economy does need 'helicopter money', but debt-free helicopter money. It needs that money not, in any fundamental sense, for the sake of continued growth (considered as an end in itself), but rather so that it can fulfill its true purpose in the best possible way: the delivery of goods and services as, when, and where required, with the least amount of trouble to everyone. Proper functioning requires an inherent equilibrium. Debt-free helicopter money would balance consumer prices with consumer incomes without adding to future costs by intensifying the debt problem. The good news is that the underlying assumption of both supporters and critics of 'helicopter money' that: "in a country (and world) drowning with debt, there are only two options to extinguish said debt: inflate it away or default" is a false alternative. There is a third option: cancel the excessive debts that are generated by the normal operation of the price system under existing financial and accountancy conventions by issuing a sufficient volume of debt-free money to re-establish an automatic equilibrium. Distribute a certain proportion of that money in the form of a National Dividend to every citizen, whether employed or not. Distribute another portion in the form of a National Discount to lower retail prices in keeping with the consumption/production ratio. This is the very core of the solution which has been proposed by Social Credit for the last ninety-odd years.

Last modified on Saturday, 10 February 2018 17:36
Tweet
Published in Social Credit Views
More in this category: Re: The Shrinking Need for a Workforce »