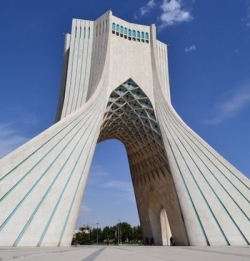 As a follow-up to my recent blog entry "Social Credit and Mass Migration", I thought it would be instructive to examine the various issues that are at play in a more concrete fashion. The following article is taken from the November issue of The Employment Journey on PEI and provides a perfect illustration of just some of the multi-layered insanities that we have been conditioned to regard as ‘normal’ under the existing financial and economic systems. I will present the article in full with my commentary interspersed.

Working to build a career on PEI includes post-secondary education

Zahra Jahanmiri arrived on PEI from Iran in 2009 with her husband and two children, who are now 14 and 9. “We would like to stay here and build our careers,” says Zahra. “Our children are happy here.”

Allow me to pre-empt the Social Justice Warriors by stating from the very outset that I have nothing but the greatest respect for the Iranian people(s) and for Iranian civilization. Indeed, the richness and depth of traditional Persian culture exceeds anything that we have inherited and managed to maintain here in North America. It is quite sad, indeed regrettable if not tragic, that, for either political and/or economic reasons, Zahra and her family were forced or heavily pressured to uproot themselves from their family, friends, acquaintances, native land, and organic culture.

The tragedy takes on another dimension entirely, however, when one comes to realize that their exodus was due to artificial reasons rather than to anything inherent to the nature of things. If Iran has the physical capacity to provide a decent living for all of its citizens, and I have no doubt that it does, then its failure to do so must, in large measure, be ascribed to its financial system. A Social Credit financial system would allow the Iranians to actualize their real credit, i.e., their useful productive capacity, and to deliver said production on equitable terms to all of the citizens. This could only contribute to the political stability of the country, both domestically and internationally. A Social Credit Iran would have to be concerned about preventing too many people from coming in, rather than with the slow bleeding of its human capital, often its most talented citizens, to the West and elsewhere.

I am glad to read, however, that Zahra’s children are happy on PEI. Indeed, it is difficult not to be happy on PEI … unless, of course, you are unemployed or destitute. Back to our story …

In Iran, her job was with the municipality of Tehran, the capital city. For 13 years, she worked in establishing and maintaining green space, which is related to her background in botany.

Before looking for work on PEI, Zahra improved her English skills by attending Study Aboard Canada PEI Language Institute.“I made a lot of friends there, and gained great information for my new life,” says Zahra.

“After one and a half years, I started to look for work. I realized my background only fitted into limited opportunities, and I needed to refresh and expand my knowledge. I considered going to UPEI but realized I needed a more hands-on education to improve my chances of getting work. Attending college was my choice to find a good job to help support myself and my family.”

The trauma of Zahra’s exodus has now been exacerbated by the inherent contradictions of the reigning economic system. Canada does not enjoy Social Credit either. On the one hand, employment in the formal economy is deemed a financial necessity for most: everyone who is able must 'earn his living'. And yet, at the same time, because of on-going technological advances, it is neither necessary nor possible to provide employment for all of the people who are currently in financial need of it (as Zahra has discovered from her own bitter experience).

As it stands, much of the existing paid work in the Canadian economy involves misdirected effort and is a form of economic sabotage. It is not geared to the simple and direct provision of what is needed to survive and flourish, but is actually useless, witless, redundant and/or destructive and is only engaged in because it distributes incomes and helps to fill the recurring price-income gap.

As a side note, it is interesting that Zahra had the good sense not to go to university in the hopes of getting a decent job. These days what is likely to help a person get hired is the practical education he can obtain at a community college. Insofar as they mislead students vis-à-vis job prospects, the universities are often nothing more than education rackets.

“I enjoyed my two years at school, but when looking for work I realized that companies were hiring people with bioscience training and education. It was not easy to think about going back to college again, but I could only find part-time work. I decided to enroll in the Bioscience Technology program, and I will graduate in 2017. I am looking for a job that will be using many of my skills and education."

The initial tragedy has now been compounded a second time. In addition to whatever education she had received in Iran, her first college programme here in Canada was not sufficient to land her a job either, so she was obliged to go back to school for another diploma. It remains to be seen if, after having spent so much time and money providing employment for Holland College employees, she might be able to find some decent full-time work herself.

Now I do wonder how it is that, upon immigrating to Canada, the Jahanmiris managed to find themselves in PEI of all places. Were they lured there under false pretences or did some government department funnel them there as part of ensuring that PEI would get its quota of ‘diversity’? While PEI is a beautiful place, having been referred to by the French explorer Jacques Cartier as the fairest land of all the territories he had encountered on his travels, it is also an inveterate ‘have not province’, i.e., a steady recipient of transfer or 'equalization' payments from the federal government, and it only has a population of 146,000 people. Economic opportunities are limited to say the least. If it weren’t for the steady influx of tourists in the summer months, the province would be in dire straits.

As far as the usual arguments that migration from exotic places is important because it enriches the Canadian cultural landscape and that ‘diversity is our strength’ etc., etc., it is often forgotten that immigrants do not exist for the purpose of enriching anybody else’s culture. They are admitted under the existing system because the economy is in need of constant growth if it is to achieve equilibrium under existing financial rules. Immigrants will consume even if they do not produce. Now, even if we were to grant the validity of the usual pro-immigrant argument of ‘cultural enrichment’, unless the Jahanmiris were to open a Persian restaurant so that the locals could enjoy such delectables as Fesenjān, I doubt very much that the kind of cultural exchange that such enrichment presupposes could take place in any consistent or meaningful manner. On that particular score, the current situation is not encouraging. With an Iranian café and a restaurant already up and running in Charlottetown (population 34,500), it would appear that the market in Persian cuisine is already glutted.

“My husband really helps me to find my way and encourages me. He is an engineer now working in Ontario after short-term employment on PEI.”

For Zahra to be able to continue to pay for her studies, he commutes from PEI to his job in Ontario. “He would love to work here. We are tired of bigger cities. When we came to PEI we were amazed at its beauty. We want a simple, safe, and healthy life here. We believe when you make a decision you have a commitment to it, and that helps with the transition right now.

“His role as a dad and a husband is very important for our family. We know it would be better if he came back to PEI to work, and he continues to look for a job here.”

She tried working part-time while in the college program, but couldn’t continue because the program is so intense.

And thus we arrive at the third installment in this chronicle of economic insanity. We are now told that after immigrating to PEI from Iran, the husband was obligated to ‘emigrate’ to Ontario in order to find long-term work as an engineer, and further, that some of the money he earns he uses to help pay for Zahra’s continuing studies in the hopes that one day she’ll have the edge or whatever it takes to find a decent job on the blessed Isle. The family is now split up due to ‘economic necessity’.

“PEI Newcomers to Canada Association staff told me about the bursary. The money will help me and my family, and I appreciate it so much. The meaning is very precious to me and we are very thankful.

“We know there are good jobs on PEI, but it is a journey to connect to the right employers. We are trying so hard to do all that we can.”

What Zahra has been describing is one aspect of what Douglas referred to as ‘the tragedy of human effort.’ There is no inherent need or realistic basis for all this stress and strain, for ‘trying so hard to do all that we can’ so that someone can connect with the ‘right’ employer. It only exists because we are all marionettes who are forced to dance to the tune of an ill-conceived and monopolistic financial system.

I do wish Zahra and her family all the best and I apologize for the fact that, after coming to a country that is better from some (though certainly not from all) points of view, Canada is still so very dysfunctional, both financially and economically.

2. For those who are unaware or unappreciative of the greatness of Iran and of its civilization, the following clip of a famous song by Dariush Eghbali, Talayedar, may, through its presentation of sights and sounds, provide something of an indication of Iran’s enduring qualities:

Last modified on Sunday, 18 February 2018 08:28
Tweet
Published in Social Credit Views
More in this category: « The Puzzle Dividends Instead of Debts »