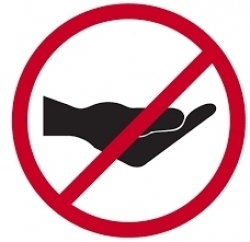 At the end of Mass last Sunday, we were treated to an urgent appeal on behalf of the community food drive. I find these appeals incredibly annoying.

I dislike charities, all charities ... and it is not because I am not a charitable person. Nor am I denying that, under current circumstances, some charities do indeed provide appropriate relief to people in genuine need (as opposed to charities that are outright scams, charities that actually do more harm than good to the people they are supposed to be helping, charities that are social engineering fronts or globalist change agents, and, on the other side of the equation, as opposed to individuals who rely on charities to subsidize irresponsible behaviour).

I categorically dislike charities insofar as the legitimate need for charities, such as the food banks, only arises because the current, structurally dishonest financial system does not allow for the goods and services, which can be produced in such abundance by modern technology, to be effectively distributed to those who need them.

Charities are thus a sign of economic failure ... a failure which is entirely artificial in its causes and hence entirely unnecessary in its existence.

To make matters worse, charities continually reinforce the distribution bottleneck by helping to prop up the oligarchic financial system, maintaining it in its dysfunctionality. They act as pressure release valves by mopping up or masking some of the mess which the existing economic order generates, thus allowing 'business as usual' to continue for another season.

Now, I'm quite sure that various charities also make some of their organizers and donors feel very good about themselves because they are 'helping the poor'. However, if such individuals were really interested in helping the poor, they should be fighting for a rational reform of the financial system, one that would enfranchise every citizen as a shareholder in his economic association. What people need, in strict justice, is a National Dividend, not handouts from their betters. True, this would make the charities redundant and destroy whatever political, economic, and social power that the sponsors and organizers of charities currently leverage on account of them, but that is the best possible result from the point of view of a genuinely charitable, i.e., not self-interested, individual.

Alas, dear reader, try explaining any of this to the hoi polloi and see how far you get ... I dare say that the experience will nevertheless be instructive: you will begin to grasp, if you haven't already, the tragic nature of our predicament.

Tweet
Published in Social Credit Views
More in this category: « The Sun Never Says ... 4th Industrial Revolution May Leave Many Workers Behind »