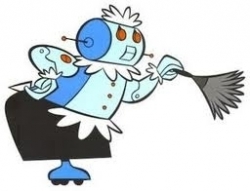 The following video, entitled "Humans Need not Apply", has received over 2 million hits on youtube. It explains how the development of intelligent machines (computers, robots, etc.) now threatens many of the occupations that traditionally relied on brain-power (while continuing to threaten those jobs that rely primarily on muscle power). The result is that more and more people are ending up and will continue to end up being permanently unemployed. The solution to this growing problem is the solution offered by Social Credit.

People must be granted access to goods and services regardless of whether their work is required by the formal economy or not. Furthermore, that access must not further indebt society, nor be dependent on redistributive taxation. It must be financed through the creation of a suitable volume of debt-free money to equate the rate of flow of consumer prices with the rate of flow of consumer incomes. The same phenomenon which, on the physical plane, is rendering people permanently unemployed (i.e., the replacement of human labour by machines) is the same phenomenon which, on the financial plane, is chiefly responsible for the gap between the rate at which the prices of goods and services are generated and the rate at which income is distributed by any modern productive process (machines or real capital involve, under current financial and accountancy conventions, the levying of financial charges for which no or an insufficient volume of income is simultaneously being liberated). Social Credit kills two birds with one stone by effectively addressing both sides of the central social problem of our age: the financial system that we've got is not designed to deal appropriately with the realities of industrial progress.