A Review of "Lives of Our Own" 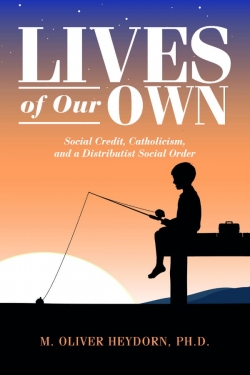 Lives of Our Own – Social Credit, Catholicism and a Distributist Social Order, recently authored and published by Canadian Ph.D. Professor Oliver Heydorn, is a monumental piece of writing for the times in which we live, both in Australia and the rest of the world. Times where we find ourselves in increasing economic and social insecurity and where the stresses of the rising cost of living and the anxiety of job insecurity are a constant source of fear and anguish for most people in Australia, especially for those who rank amongst the poor and disadvantaged. Crippling public and private debt continues to skyrocket. Families are torn apart by financial woes. Automation is replacing more and more jobs. Average people’s buying power just shrinks by the year and yet few people, if any, seem to know why or how all this is really happening. To further exacerbate this crisis, both parents are being forced to take on work outside the home at the expense of the children who must be placed in the care of commercial day care providers. And this pressure is further intensified by the decreasing availability of stable jobs, thus leading to the spoliation of family life and leisure and the economic and social destitution of men and women. Once upon a time about fifty years ago, a father could provide for the whole of his family with just one income, i.e., without the mother having to work outside the home.

Well Dr. Heydorn in his book provides a much needed explanation as to the causes of these grave economic and social inequities. He traces the main source of the problem to the private banking system which hold a monopoly over the financial and monetary system and control the flow and distribution of money to producers and consumers. This monopoly gradually transfers more and more wealth, privilege and power into fewer and fewer hands by taking advantage of a chronic gap between consumer prices and consumer incomes. The only means for consumers to acquire additional and much needed purchasing power is to borrow money from the private banks, which these same banks also create out of nothing. The aforementioned price and income gap is a recent phenomenon and is the result of the increasing displacement of human labour by technological developments resulting in fewer jobs and thus less money in wages, salaries, and dividends being distributed to consumers. There is therefore a constant need for economic “growth” for the sake of growth to fill this gap and by any means possible. In the case of Australia, this is most often being achieved by maintaining imprudently high net immigration flows into the country to provide more consumers and also the selling off resources, production, farmland and property to foreign companies and investors to pay down bank loans and fill the credit gap. All of these aforesaid actions will only be detrimental for Australia’s future as a nation.

Dr. Heydorn provides a solution to this socio-economic crisis in Australia and the developed world by turning to an early 20th century British Major, Clifford Hugh Douglas, who developed the system of “Social Credit”, a reformation of the monetary system so that high finance serves the interests of the people rather than those of the financiers. This was to be achieved by placing the creation and power of credit, that is money, back into the hands of the people. He also examines the writings of G. K. Chesterton and H. Belloc, two early 20th century writers who coined the idea of Distributism and advocated for a wide and equitable distribution of wealth and property amongst the population.

Heydorn’s proposal of Douglas’s Social Credit as a means of monetary and financial reform, incorporating the general thrust of Classical Distributism (i.e., the idea that productive property ownership should be widespread in one way or another), involves the people, acting through the state, establishing a National Credit Office that is solely responsible for ensuring that the correct financial policy will be served throughout the country. To bridge the gap between prices and incomes and to compensate for the automation of jobs, ‘debt-free’ money in the form of a universal citizen’s dividend would be created and issued to every citizen regardless of whether he be employed or not. The amount of this dividend would be adjusted to the nation’s total production so it remains linked to the productivity of the citizens and would diminish if too many citizens ceased work or production. It would replace the dysfunctional welfare state with a non-discriminatory dividend issued to all without any bureaucracy, means testing, or social stigmas attached. This dividend, by economically re-enfranchising the poor, the disadvantaged, and the lower income classes with free purchasing power, will provide a more level playing field and allow for a fairer distribution of wealth and property amongst the population as Chesterton and Belloc rightly call for. The physical, social and cultural benefits of this dividend would be transformative for society. The resulting greater economic security would significantly reduce poverty, crime, poor mental and physical health, stress, and other social ills related to financial stress and would instead encourage family life, the arts, free thought and individual freedom because it would make leisure financially possible. Economic security would no longer be necessarily dependent upon full employment, a policy that is no longer universally possible now in any case due to technological improvements. Private banks would also be regulated by the National Credit Office and would no longer be solely responsible for the distribution of credit. The selling off of Australia’s natural resources and the handing over of its land and properties to foreign owners would no longer be necessary to fill the price-income gap and immigration along with its accompanying demographic, cultural, and religious problems would be eliminated or reduced to a safer and more prudent level as it would no longer be necessary to provide new consumers in order to maintain perpetual economic growth. The compensatory money of the dividend and of the discounted price (another of Douglas’ suggestions for financial reform) would bridge the gap instead.

Dr. Heydorn’s proposal for a universal Social Credit dividend for all as a solution to the great social and economic crisis affecting Australia and the world is certainly a radical one and will require a profound re-thinking and re-evaluation of the way we look at and value work and leisure, but it may be the only viable solution in a world of growing technological automation, increasing disintegration and inhumanity of living conditions and the resulting rise of cultural and political tension between the many demographic communities and social groups competing with each other for a piece of the shrinking pie at the behest of a corrupt financial oligarchy.