We Need a Constitutional Convention! 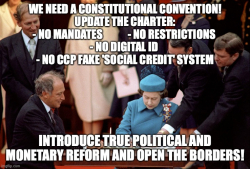 Recently, Brian Peckford, former Premier of Newfoundland and Labrador and the only remaining drafter and signatory of the 1982 Canadian Charter of Rights and Freedoms, appeared on Jordan Peterson’s youtube show and explained why he is now initiating a lawsuit against the federal government for how it has handled, or rather mishandled, the Covid-19 ‘pandemic’: https://www.youtube.com/watch?v=EdhFuMDLBDM.

It is Peckford’s considered judgement that the Covid restrictions and mandates that have been introduced by the federal and provincial governments over the course of the last two years have violated several key sections of the Charter of Rights and Freedoms, namely sections 2, 6, 7 and 15. The Charter guarantees: rights to the freedoms of association, expression, religion, conscience, and assembly (section 2); mobility rights (the right to travel anywhere in Canada or to leave Canada – section 6); rights to life, liberty, and the security of the person (section 7); and the right to equal treatment before the law (section 15). The full text of the Charter can be read here: https://www.mcgill.ca/dise/files/dise/cdn_rights.pdf

It is true that section 1 of the Charter does allow for the possibility that, in the case of unusual circumstances, the government could override the charter by limiting the rights and freedoms of citizens. But what sort of circumstances would legitimize any such government intervention? Peckford says that when the Charter was being written, it was thought that the circumstances in question would have to be dire, such as a war or an insurrection, i.e., when the state itself is in peril. In other words, as Peterson puts it, the first ministers who drafted the Charter did not envision that its provisions could be violated under conditions that were not a fundamental threat to the integrity of the country itself. In Peckford’s view, the Sars-Cov2 virus with its 99%+ survival rate does not constitute a situation in which the country is in peril. Thus, section 1 does not even apply and can’t be used to justify the government overreach.

Even if we were to consider, for the sake of playing the devil’s advocate, that section 1 could be invoked in reference to the Sars-Cov2 ‘pandemic’, Peckford points out that the powers acknowledged in section 1 have themselves been made subject to a variety of conditions and constraints. The relevant text of the Charter reads as follows: “The Canadian Charter of Rights and Freedoms guarantees the rights and freedoms set out in it subject only to such reasonable limits prescribed by law as can be demonstrably justified in a free and democratic society.” Thus, any government imposed limit must meet four tests: it must be a) reasonable, b) prescribed by law, c) demonstrably justified (via a cost-benefit analysis) and d) compatible with the context of a free and democratic society (i.e., via they must be sanctioned after due consideration and debate by the representatives of the people in parliamentary democracy). Peckford goes on to argue that none of these four conditions have been met, nor has the federal government made any attempt to meet these conditions in order to justify their covid-related restrictions and mandates. So even the process itself by which exceptions to the charter could be imposed has itself been disregarded. These two facts alone should be sufficient to plunge Canada into a constitutional crisis, but it gets even worse…

Not only is none of the criteria positively fulfilled, but the restrictions and mandates have actually showed themselves to meet the opposing criteria of being unreasonable and demonstrably unjustified. There were many competing interests and views (economic, social, even health-based) which, when they are taken into due consideration, show that the health measures and mandates would not deliver a net benefit on balance to society as a whole, even if they did work. Such interferences with personal liberty and rights are therefore unreasonable and should have been discarded in favour of the sort of targeted or focused protection measures and herd-immunity approach championed by the ‘Great Barrington Declaration’: https://gbdeclaration.org. Furthermore, there is also plenty of evidence that the restrictions and mandates were demonstrably unjustifiable as methods for controlling the ‘pandemic’ and would fail any cost-benefit analysis even on their own terms: masks don’t work, social distancing doesn’t work, lockdowns don’t work, the PCR tests don’t work (they are not reliable diagnostic tools), nor do the experimental ‘vaccines’ work to prevent infection and transmission, but all of these can and do cause various kinds and degrees of harm for individuals and society.[1] Measures that involve or incur greater costs than the benefits they deliver are obviously non-starters.

So why is all of this happening? Why are such tyrannical and irrational prescriptions being imposed on the population of the world? Though neither Peterson nor Peckford address the matter directly, it is my conviction and that of many other commentators that what we are witnessing is, in fact, the initial stages of a globalist coup d’état. That is, there are rich and powerful international vested interests who are in a position to impose policy on nation-states and to even override their constitutions. These vested interests may be identified as the world’s Central Bankers and their associated corporate entities and fronts, including the investment holding companies known as Blackrock and Vanguard (which, in turn, own controlling shares in most other multinational and transnational corporations), as well as individuals and organisations such as Klaus Schwab and his World Economic Forum.[2] It is this occult ‘Money Power’ which, directly or indirectly is responsible for co-opting politicians, the mainstream media, the health system, and the courts, etc.

The Achilles’ heel of these globalist ‘planners’, however, is that they don’t tend to handle unrehearsed developments well. The emergence of ivermectin and many other drugs as effective therapeutics for COVID-19 were one such development. The Canadian Freedom Convoys organized by Canadian truckers and which are now gridlocking the capital, blocking borders and bridges, is another. The truckers have galvanized those large segments of the Canadian population who have had their rights and freedoms violated by the covid measures and who are not at all happy about it. Canadians are coming out of their hiding places and standing up en masse for a restoration of the Charter. Let us hope and pray that this freedom movement will be hugely successful. However, this type of gumption, while necessary, is not enough. To be successful, we must marry courage with appropriate and intelligent action. So far the truckers and Canadians in general have shown tremendous restraint and prudence in refusing to be baited into violence or ‘extremist’ rhetoric. That’s smart. But we must go further!

The Chinese use the same character to designate both crisis and opportunity, and, sure enough, there is, in this aftermath of the ‘pandemic’ and its accompanying threat of medical tyranny, a great opportunity for the Canadian people, for their honest and competent experts, and for any Canadian leaders of integrity who might remain, i.e., statesmen, to use the pushback against all of the irrational Covid restrictions and mandates to strike a mighty blow against the global plutocracy that rules us and that is largely responsible for the covid-19 phenomenon in the first place. How might this be achieved?

Well, let us begin with the observation that it’s not enough to restore the Charter (and to hold the people who have violated it accountable in a court of law), we need to upgrade it, so that this sort of egregious government overreach and indeed tyranny can never happen ever again. To that end, we should eventually organize a constitutional convention, spearheaded by true patriots and statesmen who stand for Canadian sovereignty and for the defence and enhancement of the existing constitution, which will hear the concerns and attend to the true interests of ordinary Canadians. Note well, this can only take place AFTER the public and private individuals and organizations behind the current coup d'état that is in progress are identified and properly held responsible for their lawless actions. We cannot take any risks of a constitutional convention being hijacked by the very people who have brought us to this present state of degradation.

The following outline provides a list of amendments or additions to the Charter that is intended to secure and to further expand the rights and freedoms of Canadians, while simultaneously disempowering the plutocratic globalist elites who are oppressing us.

In the first place, we need to ensure that this type of medical tyranny and medical apartheid never be allowed ever again, by strictly prohibiting the following threats to the Canadian nation and to the inalienable liberties and rights of the Canadian people:

“In order to further safeguard and enhance the rights and freedoms of all Canadians, any introduction or application of the following measures and innovations are strictly prohibited as ultra vires in perpetuity:

In addition, we need to commit to the introduction of radical political and monetary reforms which will more fully enfranchise Canadian citizens with political and economic power. Monetary reform, in particular, is crucial. Leave finance in the hands of the global oligarchy and we will have to be fighting these sorts of battles over and over and over again. We need a money system that will serve Canadian citizens and not exploit in the interests of international plutocrats. While the range of needed political and monetary changes will extend far beyond what might be included in the constitution at this stage and will have to be debated and worked out both theoretically and practically, the following rights in both spheres should be guaranteed to every Canadian citizen:

1. Every citizen has the right to acquire, own, and sell private property, whether productive or non-productive in character.

2. Every citizen has the right to be regarded and indeed registered as an economic shareholder in Canada conceived as a corporate economic unit, to derive financial benefits on the basis of that
status as shareholder, and to have those benefits objectively determined on the basis of the relevant statistics as maintained by an impartial organ of the state: the National Credit Authority.

The truckers have given us new hope, let us use the social energy which they have generated to achieve what otherwise would have been impossible: a constitutional reboot which will make Canada as financially and politically independent of globalist interference as possible.

[1] See, for example, the recent study on lockdowns from John Hopkins University: https://www.news.com.au/world/coronavirus/global/johns-hopkins-institute-study-reveals-covid19-lockdowns-had-little-to-no-effect-on-mortality-rate/news-story/31fa124e5d00b54015d302d62379464d

More in this category: « Social Credit and the Four Day Work Week To Haggle or Not to Haggle? »