The Folly of Full Employment 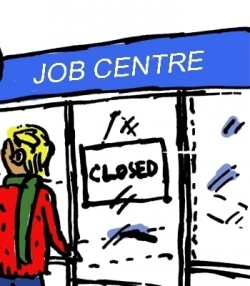 One of the axioms of the existing economic order is the policy of ‘Full Employment’ (FE). Everyone must work for his daily bread or be dependent on those who do (via either redistributive taxation or increased public borrowings meted out in the form of welfare, unemployment insurance, pensions, etc.) when he is unable to work or when insufficient work is available.

Such a policy makes absolutely no sense. It is neither necessary nor possible to realize it.

It is not necessary because we are physically capable of producing everything that people can use with profit to themselves while only calling on a minority of the available labour force and the situation is steadily improving or deteriorating – depending on your point of view. Because of continuing (not to say ‘accelerating’) technological advancements, we can produce more and/or better with fewer and fewer people working. Indeed, it has been predicted that 50% of existing jobs in the US will be automated within 20 years. This is a hard fact of life. Insisting on full employment in the face of the fourth industrial revolution is simply puritanical foolishness which is bound to increase unnecessary strains and stresses until we reach a breaking point ... from which they may be no return.

The policy is apparently not capable of being realized either because, outside of wartime demands and conditions, there is no economy that has managed to create enough jobs to meet the demand (largely artificial in nature) for jobs. It is already the case that a good proportion of the jobs that the economy does create has no meaningful or direct connection with the the flow of real goods and services that answer to bona fide human needs. In other words, many of the existing jobs are useless, witless, redundant, and/or destructive.

Economists are supposed to be keen on efficiency. Well, the first and most important form of efficiency has to do with getting the goods and services we need to survive and flourish with the least amount of labour and resource consumption. Any other arrangement is simply madness. Right now, the system is set up in such a way that we get the least amount of goods and services in exchange for the most amount of effort (as measured in financial terms). It's upside down and embodies an incredible amount of waste, both material and human. Much of our economic activity is pure economic sabotage.

Instead of ‘Full Employment’, the 'Minimum Employment Needed' (MEN, the feminists should be bemused!) should be the goal of public policy where employment is concerned. Indeed, the policy of the minimum employment necessary is one of the distinguishing features of the Social Credit proposals. Social Credit's National Dividend and National Discount would make this objective realizable by providing increased purchasing power to all, and especially by providing purchasing power to those whose labour is not required by the formal economy. [1]

Make no mistake, however, ‘Full Employment’ is not some innocent economic error, it also serves political purposes. It keeps people busy struggling to meet the weekly bills so that they have no time to reflect on political questions or energy to do anything more meaningful than act as cheerleaders for the latest star candidate:

“... if you can control economics, you can keep the business of getting a living the dominant factor of life, and so keep your control of politics – just that long, and no longer.” [2]

The policy of full employment is the prime method of making "the business of getting a living the dominant factor of life". We fight to pay the bills, when, from a purely physical assessment of the economy’s potential, we should be living in easy abundance.

But there is another aspect at play. The policy also keeps people in a position of perpetual insecurity, dependent as they are on employment-givers. Under these conditions, people are naturally disinclined to take stands on controversial issues, lest their ‘rocking of the boat’ threaten their jobs or interfere with promotions, etc. For the sake of ‘playing it safe’ people naturally tend to go along with whatever the majority of people in their milieu seem to believe is right or, at the very least, they do not raise their voices in protest against the mob consensus. This way they won’t stand out and their jobs are more easily protected. At that point, all that is necessary for oligarchy to triumph is to provide the script for the mass mind to follow, through the centralized control of media, entertainment, education, etc. (all made possible by the universal dependence on the banks' monopoly of credit) and the regrettable human tendency to blindly follow the pack will do the rest. The bulk of the sheeple do not even recognize what is happening, believing that all the frenetic and previously unthinkable changes to social life are somehow part of an organic evolution, rather than instances of a revolution orchestrated from above.

For both these reasons, full employment is the policy that is primarily responsible for our intensifying dispossession and disenfranchisement. The various economic, political, and cultural policies that subvert society and further centralize power in the hands of an international elite cannot be effectively opposed and neutralized by a servile public.

[1] Unfortunately, outside of Social Credit circles, no one seems to grasp any of this. The distributists, for example, are still obsessing about providing 'jobs for all' rather than 'incomes for all'. How can we have jobs for all, when machines are doing more and more of the work? Shall we have people dig holes and fill them up again? As noted, a large proportion of existing jobs are already tantamount to such purposeless, redundant activity.