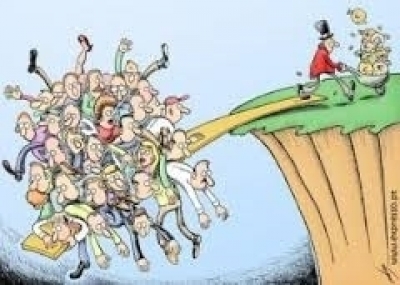 In a blog entry that is well worth reading entitled "What Choice Do We Have?", Charles Hugh Smith discusses the extreme and ever-increasing income inequality that characterizes economic life in the modern world (amongst other closely related issues): http://www.oftwominds.com/blogdec14/no-choice12-14.html. As I discuss at some length in my book Social Credit Economics, the 'Monopoly of Credit' induces a pyramidal economic structure in which people are rewarded or punished depending on how effectively they serve financial interests. The result is a gross and ever-intensifying gap between the richest segments of the population and the rest of us. Indeed, the disparity has become so great (please see Smith's 'long tail distribution' graph) that many might be led to believe, quite naturally, that income inequality is the central economic problem and that a re-distributive socialism of one variety or another is necessary as a corrective. As disproportionate as present income distributions can be, the Social Credit diagnosis points in another and deeper direction. Addressing this more fundamental problem in keeping with the Social Credit remedial proposals, is likely, all by itself and without the intrusion of a command system, to re-order patterns of income distribution along more reasonable lines. In direct response to Smith's blog entry, Wally Klinck has submitted the following comments:

Social Credit would alter this trend toward wealth concentration without in anyway suggesting that incomes should be equal. As technology replaces human effort as a factor of production the “wages of the machine” would be paid equally to all citizens. This would provide a sustainable consumer demand and provide a stable outlook for competent businesses. Quantitive easing cannot provide a remedy because the deficiency is on the consumption side. Naturally, if business outlook is not good, banks will be reluctant to release credit for more production. The economy is, as has been, said, 'costive'. It is overloaded and plugged up with un-liquidated financial costs which cannot be liquidated because the rate of flow of financial incomes increasingly falls short of the rate of flow of financial costs and prices. It matters not that adequate incomes may have been paid out it in the past. Money that has been prematurely recovered in respect of allocated capital charges is cancelled as effective purchasing-power. It does not matter how much money has been distributed, all of it, of course, being accounted as a financial cost. If it has been cancelled or placed to reserve it is not available as consumer purchasing-power—and it's use to produce additional goods further increases costs and prices. There is no solution other than an exogenous supply of consumer money which does not create additional financial costs but is capable of liquidating previous ones. It is not a testimony to human intelligence that we seem incapable of realizing that the economy exists to serve consumption and that in order to allow it to function smoothly we must provide for the consumption that supports production. Human labour is a shrinking factor in production but we have demonstrated, nevertheless, our ability to produce a surfeit of goods. But we cannot have them without drowning in debt and incurring wanton waste and war. What then? Shall we commit suicide?

Our Bank of Canada is telling us that consumers are precipitously in debt and that we should curtail this trend. What else is either new or possible? So we curtail credit buying, deny ourselves the use of what demonstrably has been and can be produced, and collapse the economy so that the strong (including especially the banks as primary issuers of financial credit) can foreclose on the weak and appropriate our past efforts. What an evil system! It can’t be brainless—no one could be that stupid. But, I am afraid the masses are so—not really, just pathetically brainwashed and misinformed. It is tragic. It is the Social Credit mission to change this sad state of affairs.

There is a lot of propaganda out there about the top 1%. This is an oversimplification and tends to support the dangerous and revolutionary socialist/communist idea of expropriation of incomes and assets. Studies have been done long ago to show that if you divided the financial incomes of the upper class amongst the overall population this would do little to enhance the income of each individual. The problem is much more complex, involving a gross error in national cost-accountancy creating a widening chasm between collective effective financial incomes and collective prices. Two very different issues.