Shall it be God or Mammon? 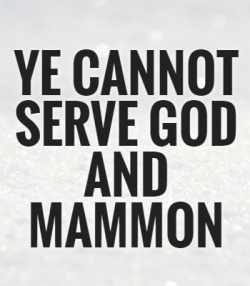 If someone comes to worship God on Sunday and during the rest of the week forgets Him and concentrates on accumulating as many dollars as he can, even at the expense of others, then he is not serving God, but Mammon. In this case, Mammon is the love of money.

But there is more than just that to consider. For example, some recent Bible translations simply use the word money instead of Mammon. Something is lost when the original word Mammon is put aside, because it is not all the money that is Mammon. Like other inventions, money is neither good nor bad in itself, but it becomes one or the other according to the intentions of the user. It can be used as a servant for the common good of the people, let's say, for social justice. Then, it is good money, as it should be. But it can also be used selfishly by people who worship it for the wealth and luxury it gives or for the power and control it allows them to exercise over other people. Then money looses its goodness and becomes evil money or Mammon.

Money is the most efficient social instrument invented by man. Human beings need to exchange goods and services among themselves and using money to do so makes it a lot easier. There could hardly be any progress in this world without it. Money works in a way similar to that of a sacrament. In the spiritual domain, the domain of grace, we were taught that a sacrament is a sign that produces what it signifies. In the temporal domain, the physical domain, money is also a sign that produces what it signifies. In the spiritual life, a sacrament must rely on Christian faith to produce efficiently what it signifies. Likewise, in the temporal world, to be efficient, money must rely on the belief and trust that it will deliver what it signifies. That is why money is also called credit, from the Latin word credere ''to believe''. If we do not believe in it and do not trust it, then money becomes nothing but worthless numbers, like counterfeit money.

Money is also a means for the distribution of wealth. In his encyclical Laborem Exercens, Pope Saint John Paul speaks about two social inheritances: first, the natural resources, which the Creator destined for everyone, and secondly, the inventions that make work progressively easier and more productive, benefiting the whole of society.

Unfortunately, the way money is now created and administered, it is not possible to distribute equitably the fruits of these two common inheritances. For such justice to be done, the present monetary system would have to undergo a complete overhaul.

Money is a sign that is meant for one purpose: to serve the social nature of man in view of his common good. If money becomes monopolized by private interests it does not serve the common good anymore, but becomes the idol called Mammon, that is, evil money used to control people and governments. So, Mammon tends to become the tool of Satan, the Prince of this world, whose ambition is to establish an evil and occult world dictatorship – a hidden control that is already with us to some extent. I'm not making it up: just listen to what Pius XI had to say in his encyclical Quadragesimo Anno, published in 1931: There he wrote that ''This dictatorship is being most forcibly exercised by those who, since they hold the money and completely control it, control credit also and rule the lending of money. Hence they regulate the flow, so to speak, of the life-blood whereby the entire economic system lives, and have so firmly in their grasp the soul, as it were, of economic life that no one can breathe against their will.'' No one can breathe against their will!; these words resemble those we find in the book of Revelation where it is said that ''… no one could buy or sell unless he had the mark, that is, the name of the beast or the number of its name''.

The more globalization and technology increases, the more this sign we call money becomes necessary for the well-being of society, but also, the more catastrophic it will be, if it falls under the complete monopoly of the beast mentioned in the Book of Revelation. There were many stages of development in the history of money; in the recent past, its different values were represented by numbers inscribed on paper or metal (such as gold, silver, nickel, copper), but now progress has introduced electronic money and credit, which is a virtual abstraction and needs only a number and a password to be moved around. Electronic money, as such, is not a bad thing. Credit cards, for instance, are becoming increasingly useful to commercial establishments and are rapidly replacing cash money. However, they can also be used for evil schemes. Suppose the nations of the world decided to regroup under a world government.

That, in itself, could be either good or evil, but it would be disastrous if it were dominated by the mammonizing powers described by Pope Pius XI in his encyclical. So, suppose such a government assumed the power to rule over the Church and issued decrees that contradicted the divine law; suppose all credit accounts and cards were to become consolidated under one dispenser, controlled by this world government; suppose such a government had the power to invalidate the credit cards and accounts of those who disobeyed its evil laws; then one would have to choose between denying God or starve.

So, you can see how important it is to know about money. Are we to drift with the flow led by Satan, the Prince of this world? Are we to let him take over the most efficacious of man's social invention to make of it the idol we call Mammon? Is there not a danger that one day, as the Book of Revelation informs us, we might ''no longer be able to sell or buy'' without its mark or number? Should we not do something to prevent the complete mammonization of money? Jesus was right in saying that ''the sons of this world are more shrewd in dealing with their own generation than the sons of light'', but he added that ''he who is faithful in very little is faithful also in much''. So, why not be ''faithful in very little'' by making ourselves wiser and more knowledgeable about money. By doing so we will contribute to the common good and to the building of a society that places the human person (rather than Mammon) at the center. (The Pope's universal intention for this month.)

Presently, as far as I know, there are no schools, universities or colleges that offer courses specifically on money - maybe money is taught within the context of economics, but not money in itself. Since money is the motor that moves the economy, why not learn what it is in itself? Why not undertake a constructive action in that direction? Why not establish a school that teaches the science of money? In fact, the concept of such a project already exists : It would be a school that is simply called a faculty, because it would offer a specialized and limited program; an independent faculty, because it would not be an integral part of any existing institution, although it could affiliate itself with colleges or universities. It would teach the history of money - we cannot really know a thing without knowing its history. It would teach the philosophy of money: the principles on which a just monetary system should be founded. It would teach the policies that would accord the monetary system with the social teaching of the Church.

Everything needed for such a project, the town of Barry's Bay can provide: a locale, housing and even a Christian college where the students of the Faculty could take supplementary courses. Furthermore, there is a faithful young Catholic university professor, living not too far away, who has done research and written books on the subject of money. He is now completing a work on money and the distribution of wealth. He is well qualified to teach monetary science and is aspiring to do so whenever and wherever Providence opens a door to such an opportunity. Everything is here! (I know what some of you are thinking): ''Everything, but money!'' Well, yes, money is a problem for us, but not for the Lord – He can even fish it out of the lake. If you have any doubt about this, just look it up in your Bible: Mat. 17, 27. Let us do our best and God will do the rest.

Finally, to add credence to my homily, let me quote an appropriate passage from The Church in the Modern World, a document of Vatican II. It reads like this: ''Though earthly progress is to be carefully distinguished from the growth of Christ's kingdom, yet in so far as it can help toward the better ordering of human society it is of great importance to the kingdom of God.'' Without a well ordered monetary system there is little chance that our earthly progress will help to produce a well ordered society of great importance to the Kingdom of God. So, when in his goodness God will have removed the control of money from the hands of the Prince of this world, He will then hand it over to His children; to those who will have been taught how the monetary system can be ordered and ruled for the good of mankind and the growth of Christ's kingdom.