SCE: A Comprehensive Guide to Social Credit and the Economy 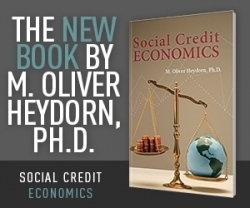 From the outset, Social Credit Economics (SCE) demonstrates that it is a well-thought-out, thought-provoking tome for thoughtful individuals. The cover itself aptly sums up the central contention of Social Credit, namely the existence of an imbalance between financial credit (represented by the coins) and real credit (represented by the globe) with the resulting hegemony of finance over the real economy constituting the root cause of the majority of our contemporary misfortunes. SCE goes on to prove this claim and to provide the solutions to the problems it highlights.

Major C. H. Douglas, the founder of Social Credit, unfolded his economic analysis in a number of books and pamphlets - but never brought it all together into a single all-encompassing work like Adam Smith did with An Inquiry into the Nature and Causes of the Wealth of Nations, Friedrich List with The National System of Political Economy, Karl Marx with Das Kapital, etc... It is this daunting task, of incorporating concepts, theories, observations, deductions, etc... spread over the Major's numerous writings into an unified intellectual framework that Dr. Heydorn has undertaken and accomplished in SCE. The outcome is a single volume that educates its fortunate reader, not simply about the Social Credit paradigm, but about how the modern economy functions - and malfunctions.

It is a reflection of the author's thoughtfulness that his tome has been meticulously structured in a manner that not only facilitates the reader's understanding, but also permits easy reference to the main points. SCE has three parts, each subdivided into a number of chapters. The first part considers how an economy is meant to function and why it fails to do so, stressing that the problem lies with the institutions governing the financial side of the economy (money and debt creation) rather than those related to the real economy (production and consumption) or society. One especially valuable section in this part is "The Seven Stages of Economic Development" from pages 14 to 25, which introduces some very important concepts, such as 'the cultural inheritance' and 'the unearned increment of association'. Also of great value is the analysis of the passive and active control devices Finance employs to bend society to its will, by exploiting the gap between incomes and prices that the system creates.

In the second part, Dr. Heydorn addresses the means by which the contemporary economic system attempts to deal with the problems it generates (above all, the gap between incomes and prices), in lieu of a radical change in the financial system - and the (overwhelmingly negative) consequences of these efforts. Particularly noteworthy is his critique of the 'Vogon Economics' (the mindset promoted by neoliberalism) that regards money as the measure of all things.

The final part of SCE provides the solutions proposed by Major Douglas for subjugating finance to the real economy (in place of the current subjugation of the real economy to finance) - namely, the National Dividend and the National Discount/Just Price - and considers how they might be implemented as well as the results to be expected. An extremely insightful chapter near the end discusses where Social Credit stands in relation to other economic systems, ('Economic Systems Revisited', pages 471
to 501).

One of the principal merits of SCE is its clarity, which greatly assists comprehension of what can sometimes be a perplexing subject. Even those familiar with the works of Major Douglas can probably learn something about the finer points of Social Credit here. For instance, until I read this book, I was under the impression that income disbursed and spent in time periods prior to the release of goods would still be mostly available for purchasing said goods - just in the hands of individuals other than those who initially received it as incomes. Instead, as Dr. Heydorn rightly points out, such spending would go to "a) repay bank loans (in which case the money is destroyed) or b) restore working capital (in which case the money will be associated with new costs when spent), or c) build up capital reserves (in which case the money will be immobilized for a certain period of time). In each situation, consumer income spent in the past must be regarded as extinguished with respect to the prices of present goods and services..." (page 155)

The author generally eschews the use of mathematics to explain Social Credit, perhaps to avoid deterring potential readers. I consider this unfortunate since many of the arguments are very easy to grasp once explained with simple arithmetic, (for example, the contention in Economic Democracy that a rise in nominal wages can lead to a fall in real wages when the capital-labour ratio exceeds parity). Hopefullly, a future edition of this otherwise unassailable tome will contain some appendices with mathematical elucidations of the more intricate points, perhaps along with a consideration of the ease with which a Just Price mechanism could be implemented in a cashless society.

As befits his Catholic background, Dr. Heydorn occasionally stresses the Christian philosophy underlying Social Credit. However, as David Astle has shown in his classic work, The Babylonian Woe, the battle between the money power and mankind long predates the advent of Christianity. Indeed, it is but one theatre of the age-old struggle between centralization and decentralization, subversion and tradition, monotheism and polytheism, - and in the final analysis, subservience and independence. Or as Lord Acton put it:

"The issue which has swept down the centuries and which will have to be fought sooner or later is the people versus the banks."

Seen from this perspective, Social Credit Economics is a most valuable weapon in the people's arsenal.

Last modified on Thursday, 22 March 2018 19:51
Tweet
Published in Social Credit Views
More in this category: « Social Credit USA 2017 - A Monetary System for all Americans How the Practice of Student Loans Fails to Embody the Social Credit Vision for Society »