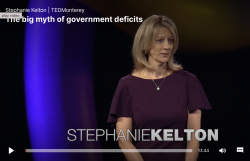 I recently came across a TED talk by Stephanie Kelton, a prominent MMT proponent. The talk was entitled: “The Big Myth of Government Deficits”: https://www.ted.com/talks/stephanie_kelton_the_big_myth_of_government_deficits#t-1067 I'd encourage everyone to view it.

While there are significant differences between Modern Monetary Theory (MMT) and Douglas Social Credit, Professor Kelton’s talk allows us to turn our attention, for a change, on some of the points of commonality.

In the first place, when it comes to the actualization of the society’s useful productive capacity, what C.H. Douglas referred to as the ‘real credit’, Kelton emphasizes, rightly, that the most important questions, the right questions, in deciding a societal production programme are not: “Where is the money to come from?” or “How will we pay for it?” But rather: “What things are worth doing?” and “Do we have the physical capacity to deliver the goods and services that will answer to human needs?”, i.e., “Do we have the real resources, the people (labour), the equipment, the raw materials and the technology to deliver these desiderata?” In other words, can we resource it and do consumers need or want it? So long as the economy is not fully employed (i.e., there is scarce capacity) on the one hand, and there exists unmet consumer demand on the other, the financial traffic light should be a green.

According to both MMT and Douglas Social Credit (DSC) then, what is physically possible can and should be financially possible. In other words, finance is or should be just an adjunct, a neutral but effective tool, that would never act as the limiting factor on our economic activity. The real world in conjunction with our legitimate needs for goods and services should determine how much money is created and issued as producer credit. To speak metaphorically, if the body of a dog were likened to the real economy, i.e., to its useful productive capacity, and the tail of the dog were likened to the financial system controlling the flow of money, the body should be able to wag its tail as, when, and where required. Money should be subordinate to the real world. At present, it is all too often the case that the real world, the useful productive capacity, is subordinate to the flow of money, which, in turn, is artificially limited or even withheld. The only exceptions to this that we see under the present dispensation are whenever there is a war or an economic crisis, such as has been induced by the restrictive responses of governments to the coronavirus over the past 20 months.

The difference between MMT and DSC, I suppose, on this particular point is that MMT seems to hold, or rather to tacitly assume, that the mechanism of government spending is the only way by means of which this additional money for the catalyzation of much-needed production can be injected into the economy. Douglas Social Credit, by contrast, envisages a system of regulation via the National Credit Authority which would make producer credit more easily available to both private and public productive agencies and activities.

A secondary difference seems to be that MMT, at least in its most common iterations, appears to abide by the axiom that all money injected into an economy should be in the form of debt or a debt-equivalent. While it makes sense to issue producer credits in the form of debt (as this introduces a much-needed discipline on productive agencies and assures the efficiency of their operations under pain of bankruptcy), it makes very little sense to insist on the “debt-only” principle when there is not enough consumer income being automatically distributed in the course of production to offset the corresponding flow of prices. Increasing the flow of consumer incomes while increasing debt is counter-productive because it contributes to inflation in the form of cost-push. To make matters worse, it doesn’t yield a stable equilibrium, but lays the ground instead for future financial crises when the necessary debt-money injections cannot be afforded by lenders, borrowers, or both.

The second major point which Kelton makes in her speech actually constitutes the heart of her message and it might also be regarded as the ‘calling card’ of MMT: Deficit government-spending is not necessarily bad and, provided certain limits are respected, is actually helpful in staving off recession and encouraging economic prosperity and full employment. That is, deficits, when undertaken in a fiscally responsible way, are good for the economy and for society at large. Thus she states: “Instead of trying to keep the deficit in check, Congress should be trying to keep inflation in check. That’s the real limit on spending.”

But how is it that deficit-spending does not automatically result in demand-pull inflation? It is certainly true that money spent on additional production need not cause demand inflation. Take, for example, the case where the additional production delivers an increased flow of consumer goods and services to balance out the increased flow of incomes. But what if the production in question doesn’t do this? Additional government production of the sort Kelton has in mind: improved and expanded infrastructure, free college, expanded medicare, and so forth, do indeed distribute incomes, but they do not add an additional flow of claims on consumers if they are distributed for free. Kelton seems sure that this type of spending would not, within certain broadly defined limits, provoke demand pull inflation either. How can this be?

If the economy were in an automatic, endogenous equilibrium — if Say's law were valid — then presumably any amount of continual deficit-spending would tend to result in demand inflation in the economy, as it would increase consumer incomes (directly or indirectly) such that there would then be too much money chasing too few goods. Since MMT holds that the government can deficit spend on public works, let us say, to a very large extent before inflation becomes a problem, must they not also be tacitly admitting (and it would have to be a tacit admission) that Say’s law is not valid?

Coming at the problem from a Douglas Social Credit point of view, it has struck me that the MMT claim that the government can deficit spend up to a certain point before it will cause demand inflation presupposes the truth of the Social Credit claim that Say’s law is not valid and that there is an underlying deficiency of consumer purchasing power in the economy. You see, the existence of the gap means that the extra spending can be used to help fill the gap, either directly or indirectly, and, insofar as this spending does not exceed the gap or suddenly inflate the demand for those things that come into the range of people with increased purchasing power, there should be no demand inflation. This seems to be tacitly acknowledged by Kelton as well when she states: “When the government spends more than it taxes away from us, it makes a financial contribution to some other part of the economy.” If government spending can make a financial contribution to some other part of the economy without provoking demand inflation, doesn’t that presuppose that these other parts of the economy are in need of the extra money so that they can function properly? Doesn’t it presuppose that these other sectors are suffering from some kind of deficiency?

To put matters simply, we can afford to run a federal (or state/provincial/municipal) deficit without dislocating the economy because there is a deficit of consumer buying power. The government deficit can help make up for the consumer deficit and thus contribute to economic stability. This conventional governmental method of "filling the gap" via public production (whether useful or not) was, of course, discussed by CH Douglas at great length. And perhaps this is the single greatest bridge or point of commonality between MMT and DSC. Of course, Douglas insisted that the gap be filled instead by enfranchising the common consumer via a National Dividend and Compensated Prices … not by mandating more production and more employment. These compensatory consumer credits would be created and issued free of debt as pure credit injections into the economy.

More in this category: « Kitson, Douglas, and the East Asian Solution