‘In Service to Mammon’ and the Due Christian Response 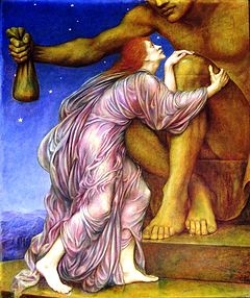 In attempting to communicate Social Credit ideas to a wider public, one often encounters hindrances and barriers of various sorts. One of the difficulties that tends to be characteristic of the contemporary Christian milieu in particular, is the belief, more or less unconscious in most cases, that engaging with questions of money, economics, finance and so forth is ‘mundane’ and therefore of no interest to Christianity, which is ‘otherworldly’. There is, in the minds of some people, a strict separation between the religious/spiritual/supernatural sphere and that of profane concerns, a separation which is somewhat analogous to the liberal democratic principle of ‘separation between Church and State’.

One manifestation of this compartmentalizing is the notion that “all is fair in love, war, and money”. In other words, because money and economics are profane they are essentially neutral, just like football, the weather, and food preferences. One can do with them anything that one pleases within the broadest of parameters … the underlying assumption being that Christianity has nothing of particular importance to say about the rights and wrongs of money and economics, i.e., has nothing of substantial doctrinal import that could or should be brought to bear on such subjects.

Indeed, in some streams of Protestantism, both historical and contemporary, one is heartily encouraged to ‘do business’ and to store up treasures with wanton abandon. Such an attitude may even be taken so far that behaviours which would be regarded as sinful in other circumstances, such as theft, rise above any suspicion if they occur within the secularly sacred realm of ‘business’, where, apparently, they are beyond the reach of religious injunctions.

Under the reigning economic model, for example, there are plenty of instances where people, operating in accordance with the rules of the game, use money to make money without contributing anything of substantial value at all to the flow of real goods and services that satisfy human needs. This is winked at or perhaps not even perceived as perverse when the same or similar behaviour would be vehemently denounced in other contexts. The invocation of ‘business’ in this type of context would seem to cover a multitude of sins.

Another application of this principle that money and spirituality/ethics/religion, etc., are, or should be, placed in two hermetically sealed containers, runs, strangely enough, in the opposing direction. Sometimes people hold that, because money and religion are separated, they are therefore strict incompatibles and that the only good thing for a sincere Christian to do is to ignore money and economics altogether and to focus exclusively on the spiritual realm. This line of thinking, which is perhaps more common amongst Catholics than Protestants (or at least was so prior to Vatican II), treats money and the things related to money as something inherently evil, or at least as dangerous, and therefore any concern with economics and business as being tantamount to dirtying one’s hands and endangering one’s spiritual life.

Against both errors, C.H. Douglas, in line with the greater portion of the Christian heritage and tradition, rejected the underlying principle of ‘the separation between religion and money’ and claimed instead that Christianity, while dealing with the transcendent, was not purely transcendent, and thus it was meant to be incarnated in this present world, i.e., in a society’s institutions, structures, guiding principles and so forth:

“It must be insisted that Christianity is either something inherent in the very warp and woof of the Universe, or it is just a set of interesting opinions, largely discredited, and thus doubtfully on a par with many other sets of opinions, and having neither more nor less claim to consideration.”[1]

“I am fairly confident that the persecution which was the lot of Christianity in its earliest years was by no means because it was concerned with something purely transcendental— something that we call the world to come. Taking the merely material implications in it, I have little doubt that what was recognised and persecuted in early Christianity was the economic implications of its philosophy. Only when Christianity became, as it did, purely transcendentalist, was it felt to be fairly respectable and fairly safe.”[2]

When it comes to the sphere of money and economics, what this means is that the ethical and anthropological principles of Christianity, things such as ‘the end does not justify the means’ and that ‘group association is meant to serve the individual members’ must be respected, not only at the level of individual actions when buying or selling, for example, but also in the structures of institutions and in their operational patterns. The natural law, what Douglas referred to as ‘the Canon’, which Christianity has also baptized and incorporated into itself, should govern the economic life of individuals and nations. Only by discerning this law, respecting it, and applying it via suitable mechanisms can the economy attain its end in an effective, efficient, and fair manner: the delivery of the goods and services people need to survive and flourish with the least amount of trouble to everyone. The incarnation of the natural law, of the Canon, is the condition of the possibility of the economy’s fulfillment.

The first of the aforementioned errors, i.e., the attitude that ‘all is fair in love, war, and money’, thus undermines and neutralizes the effect which Christianity would otherwise exert on the financial and economic dimensions of social life. It accomplishes this by carving out a niche where the natural law need not apply, where ethical and even metaphysical questions of meaning and purpose are suspended … indefinitely. It would be one thing if this sort of approach only did damage to the souls and moral integrity of its partisans, by, for example, degrading them into greedy and ruthless money-worshippers, but the tragedy is that it also produces a colossal social effect which then rebounds on all other individuals. By insulating economic and financial life from the demands of the Canon, the practical application of such a mentality to economic questions effectively thwarts the flourishing of the economy by denying it the direction and energy it needs to achieves its due or proper end.

The second error seems to be based on a particular misinterpretation of Sacred Scripture. In Saint Matthew’s Gospel we do indeed read: “No man can serve two masters. For either he will hate the one, and love the other: or he will sustain the one, and despise the other. You cannot serve God and mammon.” (Matthew 6:24) That’s an undoubtedly true statement of principle and the signpost which divides genuine civilizations and healthy cultures from their imposters. But what does mammon really mean in this context? And, if one opts, correctly, to serve God rather than mammon, what should be one’s relationship to money, riches, etc.?

To my mind, ‘mammon’ does not refer only or merely to money or riches, but also to the metaphysical power inherent in money or riches, especially under a financial/economic system which keeps money artificially scarce and which allows it to be used as a coercive tool. The essential and persisting need for something that there is never enough of allows those who do control the creation and distribution of money to enforce policy on the common individual on terms that benefit, quite disproportionately, the interests of the plutocrats in question. This more nuanced understanding of mammon would seem to be confirmed by St. Paul’s dictum, found in his first letter to Timothy, that “the love of money is the root of all evil” 1 Timothy 6:10[3]It is the love of money, not money in and of itself, that is the problem encapsulated by the term ‘mammon’.

Without a doubt, we should not, must not, serve mammon or the power of money, either individually or collectively. To do so is to betray God and the things of God (truth, goodness, and beauty) for thirty pieces of silver, much as Judas betrayed Christ in exchange for such shiny metallic tokens. We cannot, under the present economic dispensation, avoid dealing with money and at least placating the demands of mammon, but we are not to enthusiastically embrace those demands and make of them a ‘god’. That much is clear.

It is, however, a great error to go from the acceptance of such a fine and wise principle as ‘serving God instead of mammon’ to assume that the mere subjects of money, and economics, and material provisioning, are therefore inherently tainted and necessarily under the domain of ‘mammon’ and that Christians should have nothing at all to do with them. And why is that? Well, the stark reality is that until we, both as individuals and at the level of the community, deal effectively with money and economic affairs from a Christian standpoint, we will all be stuck serving mammon in one way or another, either as predators of mammon or as the prey of mammon.

I would like to suggest that, in His admonitions concerning mammon, Christ was intending for us to be neither predators nor prey. The violent incident with the money-changers in the temple reminds us that mammon is so incompatible with the things of God that it must be ‘thrown out’ entirely and not merely passively tolerated. To abandon the sphere of money and economics to the predators, and to assume that that somehow ‘gets us off the hook’ is to enable the predation and is therefore to succumb through the back door to the same service of, or rather enslavement to, mammon that we have been warned about.

It is high time that Christians, of whatever denomination, stop co-operating directly or indirectly with the service of mammon and start seeking out ways and means by which the economic realm might be incorporated into the service of God. Douglas Social Credit offers one blueprint for how that might be accomplished. Only when mammon is dethroned and a functionally correct economic order is put in its place, only then, will it be possible for the material dimensions of life to become fully supportive of the higher things, the spiritual life of the soul included. At present, not only is the spiritual life not supported by financial and economic conditions, these material conditions act as the most persistent and pernicious distraction and undermining factor where spiritual ‘prosperity’ is concerned. To cite just one typical example: how often does the current financial and economic order undermine and disrupt family life and make it unnecessarily difficult (if not humanly impossible) to live out one’s vocation well as a husband, or wife, as a father or mother? When money ceases to be master and becomes instead the servant of humanity, the common good will be more perfectly achieved and God will be more perfectly glorified. Love of God and love of neighbour: these are two very good and sufficient reasons why Christians have a sacred duty to work together to put money in its proper place.

[3] As an aside, if the love of money is the root of all evil, what would the proper use of money in the life of an individual or his civilization constitute?

More in this category: « Problems with Taxes Socialism, Social Credit, and the Monopoly of Credit - Part 1 »