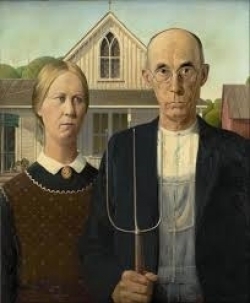 A few months ago, Abby Martin from Russia Today criticized the unhealthy obsession with work that characterizes American culture. The average American between 25-54 who has at least one child spends nine hours every day working and Americans labour more than workers in nearly every other industrialized country. The absence of things like paid parental leave, of guaranteed paid vacations, etc., only serves to reinforce the importance of employment as the central axis around which one's whole life must revolve. Work has become an end in itself, the raison d'être of one's very existence. Why did God make us? Well, to work, of course!

In contradistinction to the general attitude exhibited by the American status quo, work in the formal economy is not an end in itself, but a mere means to an end. We should work, and only insofar as the work is actually required by the economy's real or physical potential, in order to live and not live in order to work. According to Saint Athanasius, confusing means with ends is of the very essence of sin. This particular inversion of means and ends has its root in that perversion of authentic Christianity otherwise known as Puritanism, a religious ideology, nay heresy, which has plagued American society since its inception.

The obsession with work as an end in itself is so pervasive and its effect on American culture so toxic, that the following statements of George W. Bush from a Town Hall Meeting back in 2005 only garnered applause:

In truth, the fact that this divorced mother of three has to work three jobs (!) in order to make ends meet is not an occasion for exultation (e.g., "That's fantastic!") nor for self-congratulation ("That's uniquely American!"), but is rather an indication that there is something fundamentally and structurally wrong with the American economy and with American culture. By contrast, it is reported by reputable historians that in "Merrie England", which was Catholic as opposed to Puritan England, the average peasant only had to work for 15 weeks of the year under pre-industrial conditions in order to provide for his family and that he also enjoyed 150 official holidays each and every year. What did he do with his 'time off?' Well, he enjoyed it and possibly spent some of it in meaningful and especially creative activities. Both high culture and folk culture flourished as a result. Industrialization should have improved the standard of living without sacrificing people's leisure time. This has not happened because, as every Social Crediter knows, a dysfunctional credit monopoly is embedded in our present financial system, a system which does not accurately reflect and record physical economic facts. Unfortunately, the typical American is too busy working to have either the time or the energy to reflect on the profound absurity of it all. And so the madness continues ...