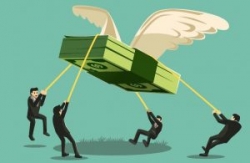 The following paper was presented at the 2019 NABIG Conference in New York City:

When one explains to the common person the proposal of a National Dividend as a state created and distributed monetary gift given to all as a credit for the nation’s total production, there is one very common objection or concern that people often raise. They think that there is a danger that this will result in inflation or a devaluing of the nation’s currency, a devaluation that may even been as bad as the hyperinflation that has recently taken place in Zimbabwe or Venezuela as a result of severe political corruption, incompetence, or foreign interference. But before one can understand why a 'debt-free' 'basic income' is not inflationary, or need not be inflationary, one must first understand something of the economic and monetary theory upon which this suggestion is based, namely Douglas Social Credit.

According to the financial and economic analysis of Major C.H. Douglas (1879-1952), there is, under existing banking and cost accountancy conventions, a chronic lack of consumer buying power in the form of income in the economy. That is, if we were to think of the economy as one big industrial machine, that machine is generating costs and prices at a faster rate than it is simultaneously distributing incomes to consumers in the form of wages, salaries, and dividends. This results in a gap between total prices vs. total incomes, a gap that is currently filled with more debt-money made available by the private banks, but which could be filled by state credit issued free of debt or the necessity of repayment. This latter option is what Douglas Social Credit proposes to do in order to fill the gap and to achieve a true financial equilibrium in economic life. Part of the ‘debt-free’ credit would be distributed to each citizen independently of employment status as a National Dividend and part of it would be used to enable retailers to offer discounted or compensated prices on all goods and services.

So, with regard to this question of inflation, it must first be made clear that Douglas Social Credit does not advocate that excessive, indiscriminate, or unlimited amounts of compensatory consumer credit be created and distributed via the National Dividend. The amount of credit or money created for the National Dividend, as well as for the compensated price mechanism, is calculated to exactly correspond to the aforementioned gap between prices and incomes and would be debited in accordance with the physical profit, or the total amount of goods and services produced for which no income has been automatically distributed, that has been recorded in a National Credit Account. This means that the amount of credit issued will only be just enough to fill the price-income gap, no more and no less. Injecting too much money into circulation would, of course, result in demand-pull inflation and thus great care needs to be taken to avoid making such a mistake.

Secondly, there is no danger of the ‘debt-free’ compensatory state credit ‘piling up’ and causing inflation sometime down the road. As the new credit is merelya monetization of existing price values which represent the costs of real goods and services for which no income has been distributed through conventional means, the new consumer credit will, just like regular consumer incomes, be cancelled out of existence as income once they are spent. The retailers will use this money to liquidate the costs of production and will pay down revolving lines of bank credit (in which case the money is destroyed) or restore working capital. Such compensatory state credit would actually be counter-inflationary in that it would liquidate the cost of goods and services once and for all, rather than the consuming public having to acquire additional debt by borrowing credit at interest to liquidate those same costs, thus triggering cost-push inflation. Contrary to what one might suppose, it is actually the current conventional financial system’s reliance upon new money in the form of debt and interest bearing loans from private banks to bridge the recurring gap between prices and incomes that is responsible for inflation and not the lack of available real goods, services, or materials. The cost-push inflation is triggered by the fact that consumer, business, and government debt has to be serviced and this servicing further erodes consumer buying power, thus requiring even more borrowing to fill an ever-increasing gap in a vicious cycle. This drives up the costs of goods and services and thus the cost of living.

The compensated price, or the idea that some of the ‘debt-free’ credit needed to bridge the gap, should be issued to retailers in exchange for discounted prices, was introduced by Douglas partly to offer a further safeguard against any possibility of inflation in a Social Credit monetary system. The price adjustment mechanism is designed to ensure that the total prices of goods and services would be constantly regulated, though not fixed, to ensure that a dynamic balance is consistently being maintained between the rate at which the final prices of goods and services are coming on the market and the rate at which the consumer incomes, including the National Dividend, are being distributed. In this way, an equilibrium between prices and incomes can always be achieved and maintained.

In the first place, this ‘debt-free’ credit would be issued to retailers at the points of sale of their products so there would be no excess credit lying about prior to the transaction that could entice retailers to raise their prices in response to an increase in the money supply. Secondly, the Compensated Price discount would lower the purchase prices of goods and services by the percentage determined by the governing price factor or consumption/production ratio, so the corresponding increase in the supply of money would be directly tied to a decrease in prices. Finally, to prevent arbitrary, excessive or unnecessary price rises, businesses would be required to come to an agreement on an acceptable and just margin of profit to be made on turnover. Although this would not place a limit on the amount of aggregate profit that could be made, it would prevent them from raising prices because there is more money about on account of the dividend. Only the profits which could be made per each good or service sold would be limited via a just price index. Free competition would then determine which businesses would be successful and not their capacity to form monopolies or price rings.

So as long as prices cannot rise in response to an increase in available money, an increase in the money supply will result in an increase in actual purchasing power and not in self-defeating demand inflation. C.H. Douglas explains this point in his Sydney publication The New and Old Economics: “The relationship of money issued, to the goods against which it is issued, is completely maintained if prices are in the first place related to costs, and the value of the unit in which costs and prices are computed is consistently related to the changing ratio between production and consumption… the payment for an article from two sources is in operation all over the world at the present time. If I, having a capital of 1,000,000, manufacture an article, of which the cost of manufacture is $5, and owing to economic depression I am forced to sell the article for $4, I am applying my private store of credit which I call my capital of $1,000,000 as a subsidy in aid of a reduction of prices to the extent of 20 percent. I can go on doing this until I have sold one million article at $1 below cost. Furthermore, I can go on doing it indefinitely if my bank will give me an indefinite overdraft. If Professor Copland will explain to me exactly where and how at the present time this most unquestionable selling below cost by draft upon credit is raising prices, I shall be infinitely obliged to him.”[1]

Finally, the objection of those who fear that the Douglas Social Credit proposals to inject new ‘debt-free’ money or consumer credit into circulation in the economy viaa National Dividend will result in inflation is most likely due to the common misapprehension or lack of awareness that, many of the previously existing conventional methods that have been relied on as a means for providing increased purchasing power would be maintained in a Douglas Social credit economy. But that is not at all the case. Since new purchasing power in the form of income would be provided viathe National Dividend rather than it being borrowed at debtviaprivate bank loans, the National Dividend would be merely replacing the role that private bank loans, excessive production, or favourable trade balances, play at present in order to provide sufficient purchasing power and fill the gap between prices and incomes. All of these aforementioned conventional methods of bridging the gap, which are inherently inflationary, would have to be prohibited.

So I submit that a National Dividend, or something akin to a universal basic income, which is fundedviamonetary reform involving money creation by a National Credit Authority can be implemented in such a way as to avoid demand-pull inflation by controlling its quantity over time and the conditions of its issuance. Such a dividend funded through monetary policy adjustments will provide a basic income to all without stigma or discrimination based on employment status or disability, but also without robbing Peter to pay Paul viataxation in order to fund it. A National Dividend will not only provide financial independence and stability to individuals, but also to a nation and to its government as a whole, because it will allow that nation to exercise sovereignty and control over its financial system in service to the common good.