Social Credit: Then and Now 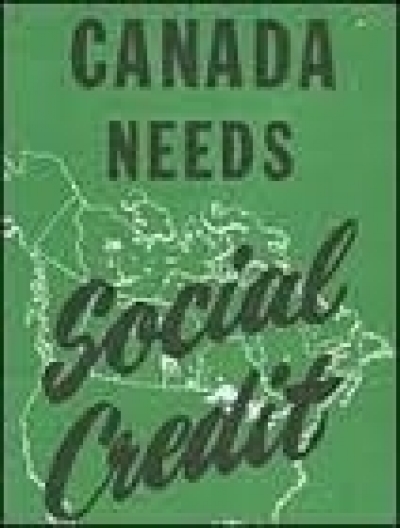 Social Credit is the brainchild of Major C. H. Douglas. During World War l, he was asked to sort out some problems at an aircraft factory in Farnborough and came across a discrepancy in their books. The factory generated costs at a much greater rate than it made available incomes to people. Thinking this curious, Douglas investigated a hundred or so British companies to discover that this imbalance was a general feature of modern industry. Wages, salaries and dividends paid to people by a factory, or other productive undertaking, were nearly always only a portion of total prices for goods made available by the same factory. This perplexed him because it guaranteed a quantity of goods that could not be sold, and what was the point of expending energy on making something that couldn’t, for financial reasons, be consumed?

It is not generally known that the assumption that underpins economics is that industry serves two functions successfully. In addition to making consumer products, industry must also make available enough money through the distribution of incomes to meet the prices they have to charge for their products to cover costs. Douglas found there was a gap between prices generated by industry and incomes (purchasing power) distributed to pay these prices in the market place. Go to https://prezi.com/prapi3awqqej/the-ab-theorem-explained for a self-paced explanation of the gap.

The remedy was rather simple. Douglas proposed people be given sufficient money as debt-free credit that would bridge the gap between prices and incomes, enabling consumers to consume in total that which was produced. This credit would not contribute to prices as costs in the production system, so would be effective in its purpose of restoring balance to the economy by bridging the price / income gap.

Douglas had exposed the fundamental flaw that tortured the smooth running of industrial economies. Thinking he had only to present his discovery and solution to the relevant powers, he sallied forth reason in hand (or head). Quite unexpectedly he encountered all sorts of opposition that either pretended not to understand the problem, or admitted openly to not liking the proposition’s object, regardless of its soundness. To Douglas, the engineer, the purpose of the economy was the provision of goods and services with a minimum of fuss. To power, the economy was, and still is, a most effective system of government. Through the method of money creation as loan credit from banks and a ubiquitous policy of full employment, people were being needlessly forced to do things they didn’t want to do, that were of no benefit to anyone. It was quite clear that the financial system, in concert with the political and industrial systems, were being utilised as a means of control, and those that enjoyed the power of these arrangements, and not incidentally those with the influence to change them, did not much like any ideas of rearrangement. Douglas saw this as illegitimate power, and out of his philosophy of personal freedom and responsibility, he devised an alternative policy in line with reality that would dismantle the status quo.

Such were the essential points from which the Social Credit movement grew. Its focus was on the education of people, about how finance and economics really worked, to counter the obfuscation that comprised economic theory then and now. ‘That which is not readily understood is taken to be profound’ was the operative principle for maintaining an obeisant people. With the herd bewildered, the financiers would be free to run the show. The hope was to lift this fog, and, once enough people understood the problem, pressure could be brought to bear through the political system to effect change. That hope is alive and well today.

Not surprisingly, significant opposition arose from the banker’s corner. They did not like the idea of giving money to people which would shred the hard-earned control of credit they enjoyed. Their power rested on the maintenance of their position of money creation through the contracting of debt that allowed them to collect on every dollar that cycled through the economy. Being the gatekeeper to a nation’s money supply is a lucrative privilege and they meant to extend and maintain it.

More surprisingly, the socialists also waded in against the Social Credit position. As every good socialist knows, the primary tenet of socialist policy is the centralisation of the control over the means and distribution of production, including its money supply. The Social Credit perspective took rather the opposite view. Social Credit sought to distribute money directly to consumers effectively transforming finance into a sophisticated voting system that would give control of production to the people: economic democracy. What, the Social Crediter asks, would be the advantage of taking the power of credit creation from the bankers and making its position still more impregnable by handing it over to a gaggle of probably less competent bureaucrats?

Needless to say the financiers and the left discovered they had some common ground when it came to Social Credit.

It might be true that the greatest hindrance to real progress is the difficulty in overcoming entrenched positions. This certainly applies in the Social Credit case. During the Great Depression, the movement, with Douglas in the lead, attracted a substantial following. The Social Credit diagnosis struck a chord with ordinary people because it was quite clear that the limitation on material prosperity did not reside in an inability to produce (the myth of scarcity), but in a dearth of money to set the then idle men and machinery to work. But then the war (phase 2) came along, quite deliberately of course, and as happens in war, plenty of money and jobs came online and the good times generally rolled – that is, unless you wound up, blood and bone, on the fast end of industrial war machinery.

Following the war, the industrial system was kept running hot. Industrial processes perfected in making planes and bombs were turned to producing fridges, washing machines, cars, etc., that didn’t last as long as they could have. America, unrummaged domestically, spearheaded this consumer frenzy turning war-style propaganda onto their own people to convince them of the moral virtues of consumption (actually the efficacy of 'public relations' as a means to control populations was realised after the First War). They were extraordinarily successful at home and abroad. The materialist mentality, enflamed by corporate sociologists and psychologists paid to delve into our sub-conscious motivations, blossomed in post war America and Valium and Cadillacs became emblems of the Brave New World. With plenty of debt-money about and the fresh impetus given to the religion of work and the acquisition of shiny new things, the causes of the depression identified by Douglas were forgotten by most and remained unresolved.

In some respects the war never ended. The necessity for the organised destruction we call war, to burn up the surplus product of ‘all the men working on all the machines’ remained, so many of the world’s nations have moved between a war footing and war, back and forward, ever since. The monopolists carry out their plans for centralisation apace through debt-money financing, the multi-national corporation and the lawyers and politicians who work for them. There aren’t many sovereign borders that remain impervious to the incursions of globally orientated ‘investment’ and the influence wielded by these extra-national entities. Also, the interests of internationalists are pursued, largely behind the scenes, by organisations such as the World Bank, the WTO, IMF, BIS, UN and the Trilateral Commission employing instruments like sweeping trade deals designed to diminish the influence of the electorate to the advantage of international operators. The TPP Agreement currently under negotiation is the latest and most significant example. A gargantuan transfer of wealth is taking place as we speak as the rights to land and resources relied on by local people are surrendered to those with financial access by gladhanding politicians with personal agendas. Overwhelmingly, it is bogus financial argument that relies on the ignorance of a tricked population to dissolve national protections, opening up resources and markets to irresponsible, remote control. We the people need to realise that we don’t have time to waste chasing non-solutions. It is time to get educated and get active.

Last modified on Thursday, 11 July 2019 14:53
Tweet
Published in The Economics of Social Credit in Summary