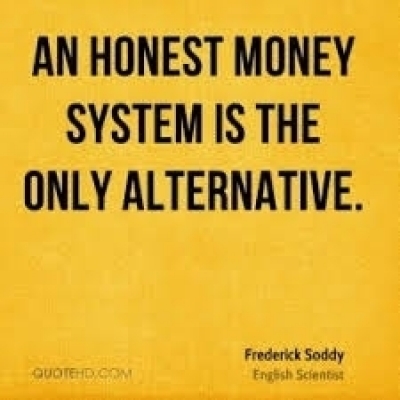 The founder of the Social Credit movement, Major Clifford Hugh Douglas (1879-1952), correctly discerned the cause of our perennial economic difficulties and also developed a series of proposals to effectively deal with the underlying problem.

As far as the economics of Social Credit is concerned, the choice with which we are faced is a simple one: we can either continue to suffer unnecessarily and increasingly under a financial system (i.e., a banking and cost accountancy system) which serves an oligarchic elite at the expense of the common good, or we can reform the financial system along Social Credit lines in order to ensure that it will operate in full service to the common citizen.

The key issue is not the fact that the banks create the bulk of the money supply out of nothing, nor the fact that the interest which they charge on loans can often be onerous, excessive, and/or exploitative. The key issue is one of policy. Does the financial system serve our policy, yours and mine, in the best possible manner: getting the goods with the least amount of effort, or does it serve the policy of those who occupy the pinnacle of the economic pyramid: getting the most effort from us (as measured in economic and, above all, financial terms) in exchange for the least amount of goods?

The standard financial conventions generate an artificial scarcity of both producer and consumer credit and then allow that scarcity to be leveraged by the private banks due to their monopoly on credit-creation.[1] As a result, economic wealth, power, and privilege are illegitimately funneled into the hands of financiers and those upon whom their favour rests.

The costs of running the financial system as a private self-serving monopoly are extremely heavy. Instead of enjoying an abundance of needed goods and services alongside increasing leisure from an economic system that is socially equitable, environmentally sustainable, and internationally concordant, we are hounded by the paradoxes of poverty in the midst of plenty and of servility in place of freedom, by the recurring cycle of boom and bust, by continual inflation (both cost-push and demand pull), by economic inefficiency, waste, and sabotage, by forced economic growth, by an ever-increasing mountain of societal debt that is, in the aggregate, unrepayable, by heavy and often increasing taxation, by social conflict, by forced migration, by cultural dislocation, by environmental degradation, and by international economic conflicts leading to war, etc., etc.

The present financial system does not permit the members of society to fulfill the true purpose of economic association (the delivery of goods and services, as, when, and where required and with a minimum of trouble to everyone) to the extent that this fulfillment is physically possible because it is a fundamentally dishonest system.

Every society relies on its inventory of ‘physical’ economic resources (land, labour, the increment of association, and, in an industrialized country, know-how and real capital in the form of machines and equipment) in order to provide its members with the goods and services that they need to survive and flourish. This stock of raw economic power is what Social Credit theory refers to as the real credit. It is a society’s useful productive capacity.

By contrast, financial credit, or money, is only a method of representing this real credit so that production can be catalyzed and then distributed to consumers. The creation, issue, and recall of financial credit is administered by a society’s financial system.

The primordial problem with the reigning financial system is that it does not issue and recall financial credit of the right nature, at the right rate, and under the right conditions so as to accurately represent society’s real credit. Instead, it artificially limits the real credit and misdirects many of our economic activities.

An honest financial system, i.e., one in which the nature of financial credit, the rates at which it is issued and recalled, and the terms under which it is issued and recalled, accurately represented the physical facts of real credit, would allow the citizens of a nation to freely produce whatever they desired (so long as the production in question was physically possible) and to consume all of the resultant goods and services without the imposition of any further and illegitimate conditions (such as the contraction of debts that are, in the aggregate, unrepayable, and/or additional work). Money would be regarded as a mere accounting unit and not as a scarce commodity that is to be rented out by the private banks (N.B., the banks currently claim the ownership of the financial credit that they create).

An honest system would operate quite naturally in the interests of the common citizens because it would recognize that a society’s financial credit belongs not to the private banks but to those who actually own, in varying degrees, the real credit that the financial credit is supposed to represent. Hence it follows that consumers, who may rightfully be regarded as shareholders in their country’s economies, are the people who should determine a society’s overarching financial and hence economic policy.

Whenever there is, on the one hand, sufficient ‘physical’ economic resources to actualize a specific production programme, and, on the other hand, a real demand on the part of consumers for the goods and services which that programme would make available, sufficient financial credit to catalyze that production should be created and issued as a matter of course. Similarly, whenever there is, on the one hand, a certain volume of consumer goods and services coming on to the market, there should also be, on the other hand, sufficient consumer purchasing power in the form of consumer income (not associated in any way with additional or extraneous costs) to purchase that volume in full and to liquidate all of the corresponding costs of production.

In order to accomplish the equation of society’s financial credit with its real credit, Social Credit proposes the establishment of a National Credit Office. The NCO would be a politically independent organ of the state and a purely administrative device. Its activities would be entirely determined by statistical data and that data would be the result of the free decisions of private firms, governments, and individual consumers in conjunction with the physical facts of the economy's natural resources. The NCO would guarantee sufficient producer credit in line with a society’s useful productive capacity and sufficient consumer credit, in the form of a ‘debt-free’ National Dividend and National Discount, to equate the flow of consumer purchasing power with the flow of consumer prices. The dividend would also ensure that the increasing number of people whose labour is no longer necessary in the formal economy (on account of the intensifying trend of technological unemployment) would nevertheless have access to goods and services. One can read about the stark differences between a National Dividend and conventional basic income proposals here: http://www.socred.org/index.php/blogs/view/the-big-difference-between-a-basic-income-and-the-national-dividend.

Social Credit does not advocate the nationalization of the private banking system, but rather the breaking of its monopoly and the restoration of the ownership of financial credit to the individuals who make up the community. It is completely opposed to any proposal that would see us jump from the frying pan of a self-serving private system into the fire of a complete state monopoly over money and its issuance. The latter would be a fine basis for the introduction of a totalitarian society. In direct opposition to this vision of the social order, Social Credit stands for the decentralization of economic and political power in the direction of the individual. What Social Crediters want is a financial system which, while dutifully serving a public policy of maximizing individual benefit, is nevertheless privately administered to a very large extent.

Finally, in spite of the presence of the word ‘social’ in Social Credit, it must also be recognized that Douglas’ economic proposals are not socialist but rather anti-socialist. They are completely consonant with and supportive of a free enterprise economy (incorporating free markets, private property, individual initiative, and the profit motive) so long as it is financially structured towards the fulfillment of the true purpose of economic association Cf.http://www.socred.org/index.php/blogs/view/why-social-credit-is-not-socialism.

[1] N.B., the artificial scarcity of consumer credit or the chronic deficiency of consumer income that Douglas identified is not due, in the first place, to the charging of interest on loans but rather to the way in which real capital (machines and equipment) are financed and the way in which their costs are then accounted and charged into the prices of consumer goods. Cf. http://www.socred.org/index.php/blogs/view/social-credit-and-usury.

Last modified on Saturday, 10 February 2018 18:01
Tweet
Published in The Economics of Social Credit in Summary