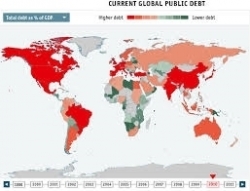 Some readers may already be familiar with the U.S. debt clock: http://www.usdebtclock.org/.

One of the things that is interesting about this presentation is that The Economist maintains the delusion that public debts are monies that governments borrowed from the savings of their citizens: "After all, world governments owe the money to their own citizens, not to the Martians." While a certain (usually small) percentage of public borrowings may take this form, much of it involves, directly or indirectly, the creation of new money on the part of private banks which is then effectvely lent to governments via the purchase of government bonds, etc. It might just as well be owed to the Martians. Repaying this kind of debt does take money out of circulation, whereas repaying debts to private citizens does not in and of itself (although the proceeds may be used by the recipients to pay down bank debts).

Another interesting matter is that the figures for the U.S. federal debt are 3.7 trillion dollars lower (or thereabouts) in comparison with the figures reported in the U.S. debt clock.

Of course, in a Social Credit society, all chronic public debts (together with the interest charges that are levied on them) would be eliminated. A financial system that was in balance and that accurately reflected physical economic facts could not suffer from a continual build-up of public indebtedness at all levels of government.